I’m scared because the land around me pitches up into the sky. I haven’t seen anything this steep since the Rockies. The road curves around the voluptuous folds of earth. Tomorrow I must cycle.

I’m scared because I’m not sure that I will make it. But I need to, have to. I am alone here and there is nobody to pick me up. If I can’t cycle up French Mountain then I will walk it.

This is what I wrote the night I camped at Corney Brook, a basic campground nestled between the gulf of the St Lawrence and the looming French Mountain. It was supposed to be a rest day but I decided that, rather than fret all day on Cheticamp Island about the looming ride ahead, I would shuffle forward 26km to make the ride along the Cabot Trail less epic.

I still managed to fit in some of the fixtures of a rest day. I did my laundry in the worst manner possible. I realised once I had trekked all the way over to the laundrette that I had forgot my camp soap. Oh well, I guess this normal soap will do, I thought, breaking off a few lumps with my fingers and smearing them on my tshirt. It was only when the clothes were hanging on my self-made washing line that I noticed the lumps of normal soap were exactly where I had smeared them. The tissue I had left in my short pocket was now in tiny flecks of white scattered over everything. If I’d had time I would have washed it again. But I didn’t. And since it actually smelt nice and clean, the soap smears and tissue fluff remain.

Another fixture of a good rest day is to have a good campfire and a beer. The problem with that was that the basic campground I was shuffling to did not sell firewood. I had purchased firewood on Cheticamp island but, as per usual, not burnt half of it. It seemed a waste to leave it behind so i set about strapping in together with an ingenious set of knots and affixing it onto Monty. It weighed an absolute ton but I was quite chuffed with myself. 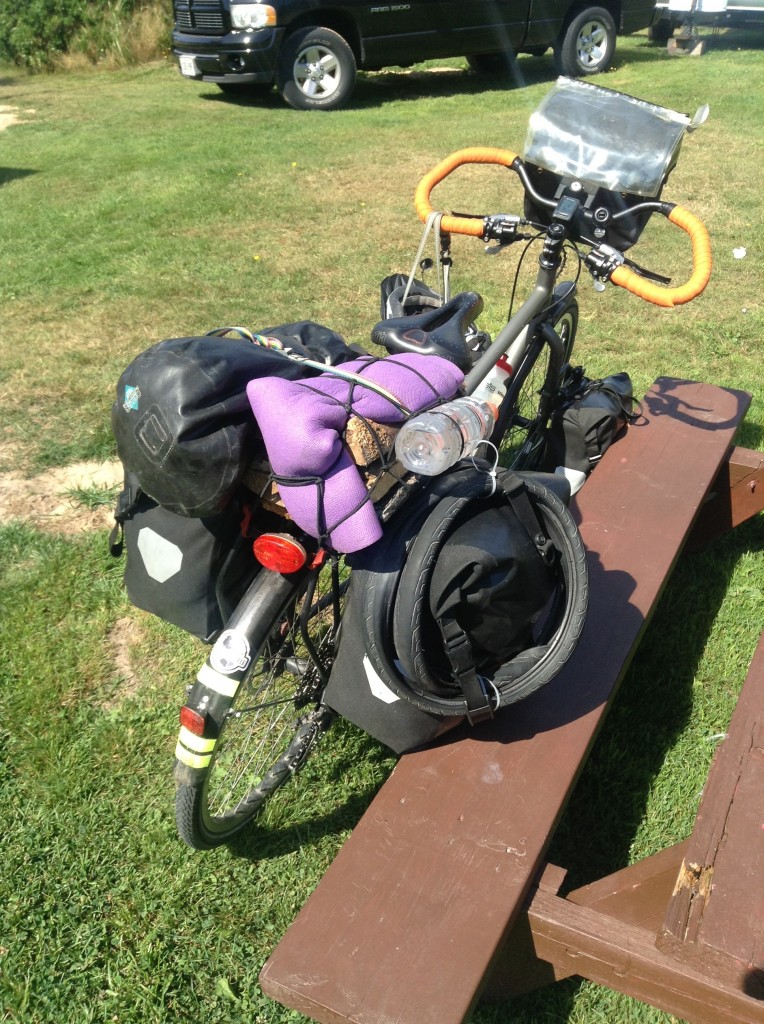 On route to the campground I passed through Cheticamp village and picked up a beer which I would late leave to chill hidden under a rock in the brook. I was all set for a lovely afternoon.

Blimey the hills. No sooner had I rounded the corner out of the village, over the rocky river and into the national park when the contours started to riot like the noise visualisation on a booming stereo system. It’s not called the Cape Breton Highlands for nothing. The road swept and twisted like a rollercoaster over the hills and plonked me down at the campground at the very bottom of French Mountain. 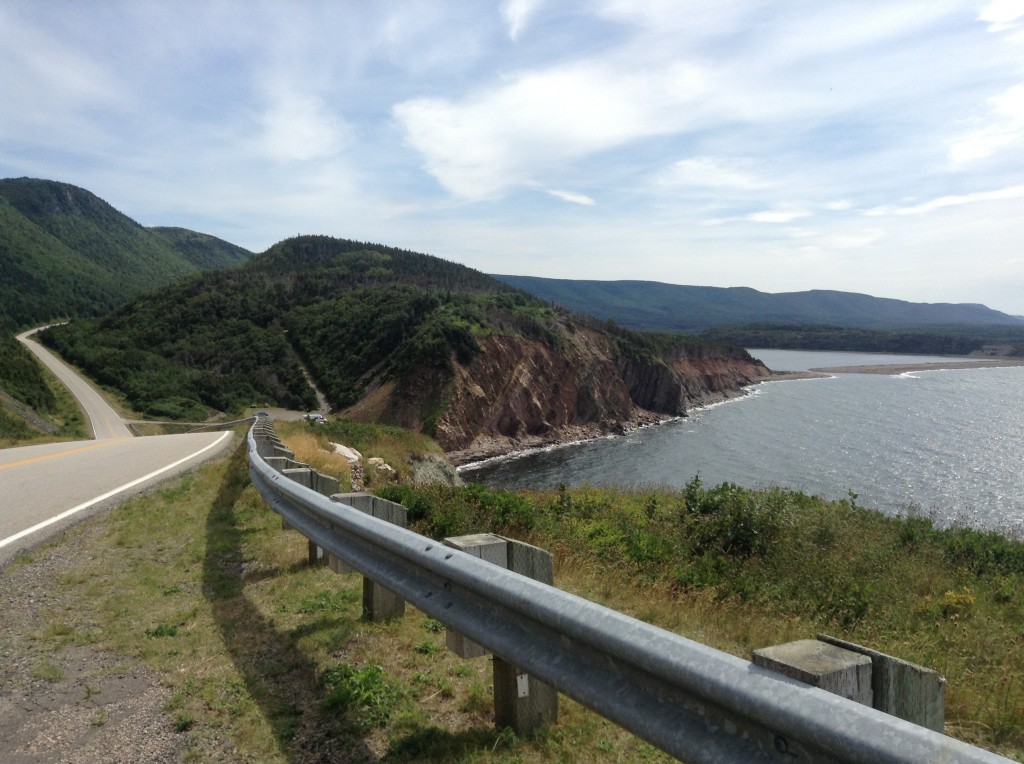 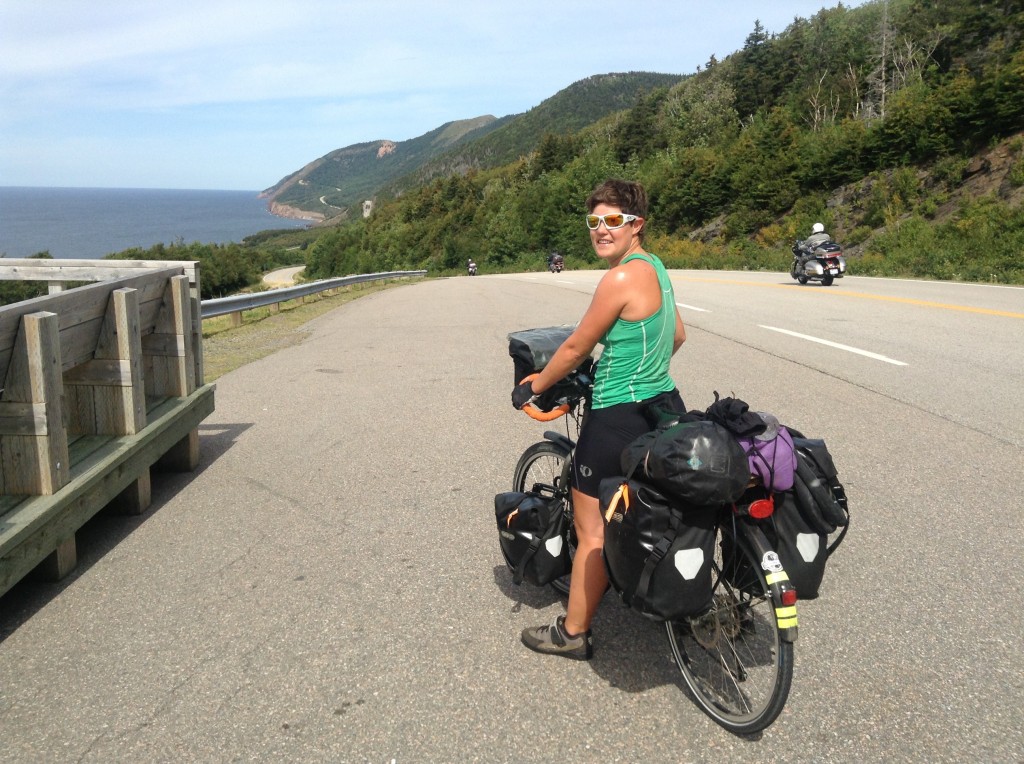 After a small afternoon snooze and exploration of the pebbled shore, I opened my beer and began cooking my beans and spider dogs on the campfire. I noticed a family had arrived and was setting up their gigantic tent in the pitch next door. The daughter was looking for firewood but finding none. I had just finished my last spider dog when the the Mom and daughter came over.

“We’ve made too much food and wondered if you’d like to have some?”

Second Dinner!? Yes, please. I wandered over and was given a healthy portion of spaghetti with fresh mussels and shrimps.

“I’ve never eaten mussels before,” I commented. And Dad gave me a quick tutorial in how to eat them.

It turned out that it was the daughter’s thirteenth birthday. So she had got to pick what they had for dinner. They wanted to have a fire but didn’t have enough wood.

“I saw your firewood,” Dad said, “so figured they must sell it here because you wouldn’t carry firewood on a bike. Especially here, up those hills.”

I invited them over to “mine” for a campfire dessert and rushed home to tidy up my fireplace so that there was a clean space for them to sit. Thankfully I had ample ingredients for s’mores so I was very pleased to be able to share them with the birthday girl. She didn’t get a cake but she did get to toast some s’mores. And a few marshmallows caught fire so she had blow them out like a candle. What a great birthday.