Is cycle touring genetic? It’s certainly in the Rock DNA. Last year my Dad cycled coast to coast across France, navigating his way using just his smartphone. So I invited my Dad to write a guest blog on his digital cycle touring experience… 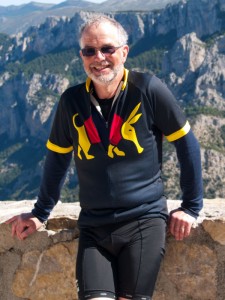 Steve Rock (aka Daddy) in the Gorges du Verdon

“This time last year I was cycling my bike (or sleeping in my tent – I didn’t do much else) somewhere in France between Caen and Cannes. I was celebrating my 60th birthday by fulfilling an ambition to cross France coast to coast.

This year I will spend my birthday driving Dino to the airport at 5am! But she’s also asked me to write a guest blog spot about digital navigation.

Paper v. phone
The traditional way for a Brit to do a long cycle ride such as Le Jog (not French, but Lands End to John O’Groats) was to buy a road atlas, rip out the pages that didn’t cover his or her route and discard the remaining pages as they pedalled cycled north (traditionally south-to-north because of the prevailing wind). The modern hi-tech way is to dispense with paper maps and do it all on a smartphone. It worked for me but would it work for you?

The idea is you have a map app on your phone or tablet showing the relevant part of the world, with or without your planned route plotted on it. The device is GPS-enabled, so it can indicate where you are. In theory you’re never lost – how great is that!

But like most electronic devices: great when it works, useless when it fails. It may not even fail itself, but have failure thrust upon it when you drop it, drown it, bake it, lose it, find it’s eaten by a bear and so on. Whatever the reason, you need backup.

Back up
My backup in France was the confidence that I could find my way to a village large enough to have a service station selling a road atlas, then tear out the pages I didn’t need. This approach might not work so well in other parts of the world.

In places like Britain and France where there are lots of wiggly roads it’s very useful to be able to plan a route away from the busy roads and make sure you stay on it. It’s also quite likely you won’t need to travel for more than a day or two before you stay somewhere you can recharge your phone and spare battery pack(s).

Somewhere like Canada there are not so many roads and they all go in straight lines at right angles to each other, so your navigation needs are different. It can still be reassuring/depressing (delete as per your experience) to know exactly how many more kilometres and hours of cycling there are before the next bend in the road, although I’m told sometimes you could be days between campsites with electricity.

So how good is digital touring?
It’s good for showing you:
* Where you’ve been (if you switch on tracking with GPS and/or mobile data). GPS will use your battery, mobile data will eat it even quicker and also clock up data charges)
* Where you are (if GPS is on)
* Where you should be and how to get there (if you’ve planned a route and stored it)

But you need a backup plan.”

You can read the full article my Dad wrote for Cycle magazine about digital cycle touring.

Do get in touch if you are a digital cycle tourer. We’d love to hear about your experiences.