Today we dried off. Last night we’d erected a washing line inside our lean-to and hug our soggy cycling clothes overnight. In the morning they weren’t quite dry and they still smelt as yucky as you’d expect but at least we hadn’t had to sleep with the whiff of eau de sweaty cyclist in our tents.

I pulled on my wet shorts (not a feeling to be savoured!) and in their place hung up my tent to dry while we continued our morning ritual of porridge, tea and coffee.

The first part of the ride was an easy one, following the A6 north and then meandering on a bike path through Lancaster. We met another LeJogger standing in the supermarket car park. For a cycle tourist, he didn’t seem very chatty but still recounted the issues he had experienced so far: he was supposed to be cycling with his son, who had gone home because one of his legs and one of his arms hurt. The man had also spent yesterday in a bike ride sorting out a buckled wheel. His bike had a trailer which meant he was carrying less weight actually on the bike. I wondered how on earth this had caused his wheel to buckle and then I noticed that he was carrying no fewer than 5 litres of water. It’s not exactly like the Lake District is short on water so goodness knows what else he was carrying.

We had a scenic climb out of Lancaster as we ascended towards Shap. Beautiful views of the Lake District stretched away to our left: the ridge of the high streets in the background, green dales, a deep river valley, dry stone walls held together by clumps of moss, and a white sprinkling of sheep.

Half way up the hill we stopped for a picnic in a lay bay and enjoyed the view. While we devoured Cheshire cheese from yesterday (was that really only yesterday?), carrots and pretzels, our cycling clothes were left hanging over a farmer’s gate to flap a bit drier.

Climbing up Shap was the focus of the day. The summit, at close to 1400 feet, is the highest point in our ride to John O’Groats. I settled into an easy gear and marvelled at the funny shaped hills which geology had somehow squeezed and prodded like play dough into weird and irregular lumps. The clear weather at the top revealed a panoramic view of the surrounding hills: the Lake District on our left still and the Pennines now visible on the far right, stretching miles away into the distance over lush green fields and tiny villages. We celebrated the summit by eating the Kendal Mint cake we’d just bought (in Kendal). How appropriate.

The rest of the way was downhill, in the literal sense, and anything but in the figurative sense. We freewheeled in fine weather down from Shap, skirted the edge of Penrith and headed into greener fields in search of our campsite in the Eden valley.

At the campsite, we hung up our final washing line of the day to dry out our thermarests. The campsite shares its site with the community swimming pool and the local park. While locals learnt to kayak roll in the pool, teenagers hung out in the park and kids ran around the campsite.

Dry at last, I laid down to start reading the book I have been carrying for two days but not yet had time to read. An oyster catcher called its way along the fast flowing Eden river that borders the end of the campground. In the background I can hear the beating sound of the teenagers dance music mixed with the rural baaing of the sheep. 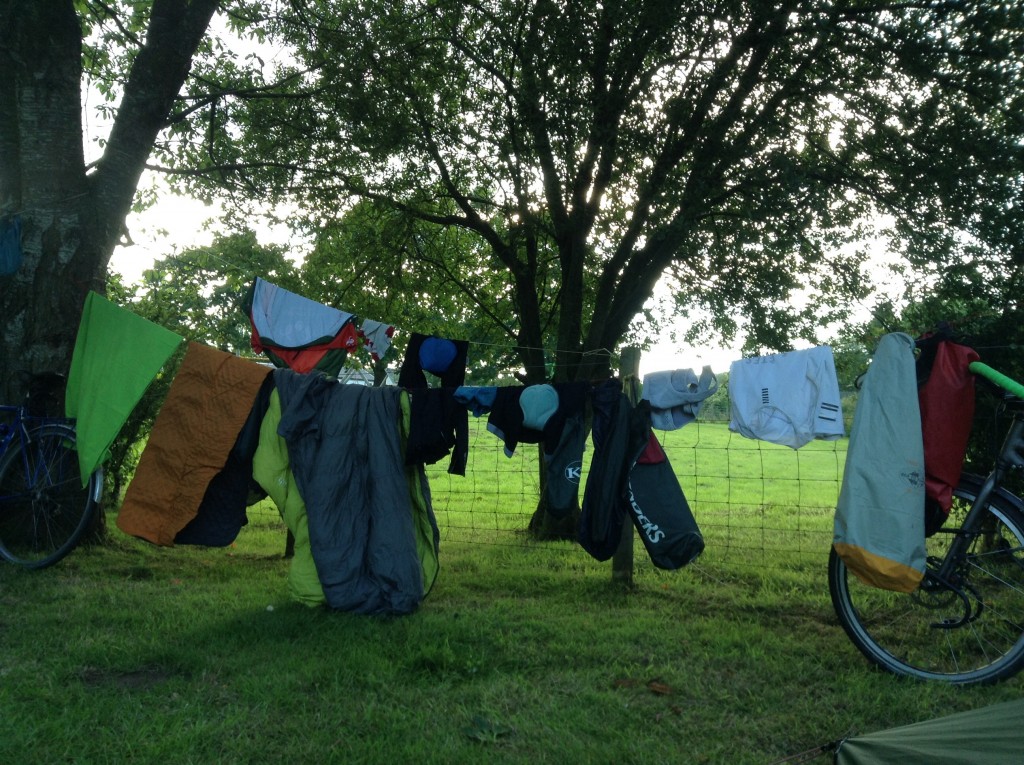