3 to 30 mph in a minute, every couple of minutes. That’s what it’s like cycling across Ardnamurchan, a wedge of land that sticks out to the mostly westerly point of the UK mainland. The B8007 is one of those Scottish single-track roads with passing places, and follows the north side of Loch Sunart from the ferry landing at Kilchoan to Salen, where our route turned inland. “Follows” in this context should be taken in the metaphorical sense, as it goes up and over all the headlands instead of around them. The result is a rollercoaster road that is rarely straight or level for more than a few metres and one that taxes your gear-changing skills as well as your leg muscles. The day was up and down, up and down, in more than one way.

Starting the day with a ferry crossing meant that we had another opportunity to sample the delights of the Tobermory Bakery and stock up on calorific goodies. I probably should have stocked up on more calorific goodies than I did because not far across the wild coast of Ardnamurchan and I began to not feel so good. Sick, nauseated, out of gas..? It was hard to say what the problem was. I hadn’t felt great as the ferry had lurched around on the crossing, not heading up the hills I became to feel quite faint. How are my legs still moving? It was like the wheels were spinning on gravel and not moving, the key was in the ignition but no power was coming out. I limped up the hill, my stomach an uncomfortable knot of pain.

By midday we’d done less than 20 miles with more than 40 ahead of us. But I must have looked sufficiently desperate enough as we pulled into a quite picnic spot by the shore. I had no eyes for admiring the coastal views as I lay down on the bench clutching my stomach while my Dad boiled up some noodles. All I wanted to do was be teleported home to my sofa, a blanket and my cuddly penguin-shaped hot water bottle. Instead I lay on a bench. The hot noodles however began to nourish me. My hunger returning I then ate the rest of my flapjack, then ripped open a large bag of jelly beans. As we pedalled off, I kept my sugar levels high by nibbling jelly beans every few miles.

Thankfully we soon joined an A road and turned inland across the peninsula. The road became a bit straighter and the hills a bit longer. A small road side shop resupplied me with fudge, honeycomb slice, a banana and a Mars bar which kept me on a sugar high for the road ahead. With more sugar and slightly easier terrain we were able to maintain more of a rhythm going up steadily and going faster on the way down.

The peninsula is renowned for being one of Britain’s last wildernesses. The scenery in Ardnamurchan was stunning in its scale, even on one of those dark days when the sky is low and threatening rain. Exposed to all weathers, inhabited by fewer (not doubt heartier) souls, it is not somewhere you would want to be caught out. The forecast for the day was heavy rain in the afternoon. Fortunately for us it did not start until the last hour of cycling, by which time I could start dreaming about the hot shower and warm comfort of the B&B we had booked for the night. Though I love camping, I think one of the things I love most about it is how much more you appreciate the simple stuff (eg pillow, clean sheet, a toilet that is en suite and doesn’t require you to hunt around for your waterproof and scurry across puddles to get to). So we were glad of our decision to have our first non-camping night for two weeks. We celebrated by watching the day’s highlights from the Tour de France while reclined, very comfortably, on ample plump cushions and pillows.

P.s. My Dad wants to include that today we saw “The Jacobite”, one of Britain’s last steam trains (headed by a Black Five, for those who are interested in such things). It passed us just near the Prince’s Cairn, marking the spot where Bonnie Prince Charlie came ashore in 1645. 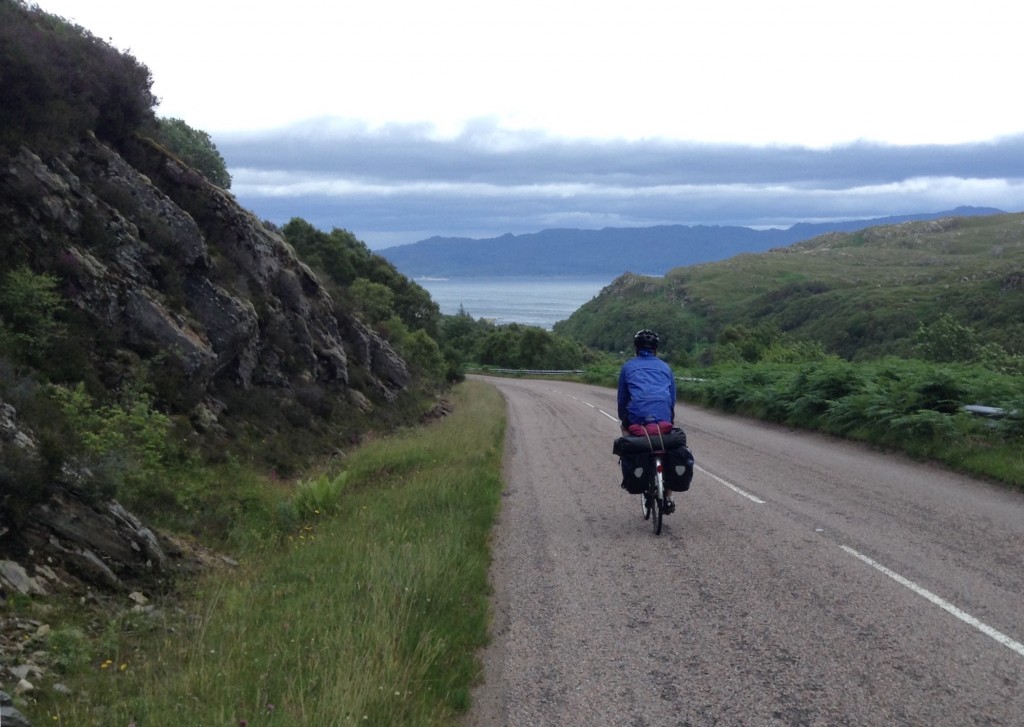