The day started with chatting to bikers Dave and Dave who were camped next door (flap?) to me. Dave 1 (who had about a 2:1 facial hair to head hair ratio) was very chatty in telling me about the adventure they had planned – leisurely touring around the Gaspe. Dave 2 (15:1 ratio due to thick beard and near baldness) had converted an old motorbike into a beer cooler on wheels. I enjoyed the rare chat in fluent English with these guys before it was time for us to hit the same road at different speeds.

Again i was treated a pushing tailwind. The sun shone, then it hid, then the clouds drizzle a bit but it was all quite liveable.

Uh-oh. Detour. Je n’aime pas le detour. I looked on my map (ie app on iPad) to see that there was a main highway running almost parallel. The road ahead was closed and looked to be so cut up that it would be impassable. I turned off the 132 towards to main highway. I was just approaching the highway when I thought… Oh, where is the slip road? Il n’y a pas de slip road. Assessing the steep descent I figured it was doable so unloaded a few panniers to carry them down the 45% gradient. 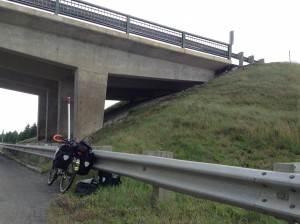 Some detours are for bikes only

I pedalled on merrily. Passing through a small town I flagged down by a loud “bonjour!” and the sight of skinny, lycraed cyclists leaping into the road.

Here I met Alain, Eve and Claude. The panniers explained who was who. You can tell who is Canadian and who is European from the panniers. Alain had MEC panniers and thus was Canadian (plus he was clearly Quebecoise as spoke in a rapid, accented French that I barely understood.)Claude and Eve had Ortliebs so I knew they were European. It was only later that I noticed the two Belgian flags flapping from their bikes.

Alain, skinny and angular, was fashioning loopy bicycle shaped wire earrings. He and his bike were largely dressed in matching yellow.

Claude, a fit, nervous looking woman had taken off her helmet to reveal greying hair. Her helmet sported furry horns.

Eve, slightly more normal than the other two, spoke excellent English in a soft, relaxed manner. Her big green sunglasses swamped her moon-shaped face. The sticker attached to the front of her helmet instructed “bend and peel”. “Instructions,” she explained jokingly, “for what to do if you find me in a medical emergency.”

Eve and Claude were travelling together but had, it would appear, already flagged down the eccentric looking Alain to help them. Claude had a flat. I fact she’d had 4 flats in the last 2 days and I was called in to help.

You know when you hear hooves beating you think unicorns because you assume that one of the other cyclists has already ruled out horses, right?

Alain was pulling the tyre apart, exclaiming that the tyre was the wrong size for the wheel. (It wasn’t, it was just baggy.) While I wandered over to chat with Eve about the joys of cycling around Europe, Alain was checking the tyre.

“A-ha!” He exclaimed, as Eve and I were midway around Denmark. He pointed to a gritty scrap of sharpness poking through the tyre.

The Belgians have swapped the inner tubes without finding the cause of the puncture. A school boy error. Hoof beats means horse.

Highly amused I said my Bon Voyages and pedalled off. 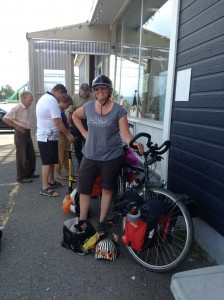 Shorty after lunch (yes, avocado and crackers) I found the micro-brasserie that the Wanderers had visited a few days ago. I recognised the place from Katie’s description of the chickens, cat and benches outside. Is it just cycling or was that not the most delicious beer had all year? The blonde, Belgian style beer was refreshingly and fruity. Sadly they do not export. I schlurped and i munched the accompanying cheese and bread while fantasising about a chocolate, cheese and beer cycling tour of Europe. 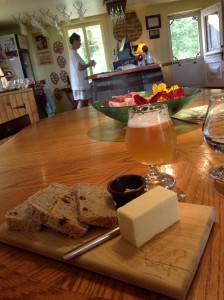