What is that? I woke up in the middle of the night to a flashing light and muttering. I peered out the flat in my tent to see three dark figures sitting on my picnic bench. Monty was locked to that picnic table. They were speaking a strange, unfamiliar language. No, not French. Or Russian. It sounded sort of Eastern European though. The light was due to the campfire they had started. I unzipped the flap a bit more to get a better view. Monty looked to be okay.

It never ceases to amaze me why people, when given the choice of 3 picnic benches, will choose to sit on the one with someone else’s bike locked to it when there are another 2 benches available nearer their tent. I’m sure they were just BBQing but what if a globule of beef fat leapt off the BBQ and splashed onto Monty? I am sure he is a vegetarian bike.

I fell into a unease sleep of weird dreams. Thankfully, the thunderstorm that I had seen strobing on the far horizon when I’d gone to bed never passed overhead.

An early start meant I was on the road just after 8am. I have no idea how I managed to pack up so quickly. Usually the first two hours of the day are spent faffing with bits of kit and nipping repeatedly between my litre bottle of strong coffee and the toilet. Not so today.

My tent flapped dry quickly this morning. Because, oh boy, it was windy. Usually the wind takes a while to get going but this morning it managed to blow my tent off the line while I was packing up.

The fleurs-de-lys flags of Quebec, straightened by the wind, pointed in the direction I was going. I barely pedalled. I was just pushed along at high speed by the gusting wind. I flew past roadside stalls selling freshly picked strawberries and sweet corn.

I stopped by the river for second breakfast. There were white caps on the St Lawrence as the strong westerly wind caught the water, dashing the waves against the bank. Wind surfers were out gliding to and fro. 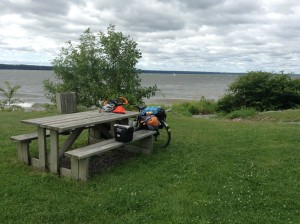 Note windsurfers on the river

All morning I was overtaken by cyclists. Usually I don’t let myself be overtaken and chase after the offending cyclist. Today I didn’t bother to do anything except say “bonjour” to the roadies who sped by on their Cannondales and Pinarellos. I would assess their gastrocnemius and decide whether, if I riding a Pinarello rather than a loaded mule, I could cycle that fast. Today I was content to coast.

Going into Quebec, I had to ascend a few sharp hills but mostly it was flat as I merrily pedalled along. The paths and parks that bordered the St Lawrence were bustling with Saturday morning folks out cycling, skating, packing away their windsurfers, stopping for a picnic on the bench, taking a photograph of the intriguing artwork in the path. Soon the famous bits of Quebec became visible as I came round past the port. The cliffs! I imagined General Wolfe climbing these steep, rocky slopes up the side of the city to fight the French.

I knew that unfortunately famous cliffs also meant famously steep hill up to my hostel. But first I needed to sort out Monty.

I scooted into a bike shop. I had bought a new chain in Montreal but it was skipping so I switched back to the old chain. I needed a new cassette.

Amazingly I managed to have an entire conversation with the bike mechanic in French. Admittedly I had practised a bit of the vocab with John but it all went well.

I know what you’re thinking: fluent.

Having forked out a small fortune for a shiny bit of metal, Monty is now fashioning a brand new 11-32 shimano XT 9 speed rear cassette. Whoop. To test it and the new chain out we fought up a hill that resembled a cliff edge. I am amazed we did not fall off backwards. The chain and cassette survived.

I dropped Monty off at the hostel and wandered into the old part of the city. Old buildings! I had forgotten that buildings could be old. The old stone and narrow-ish twisting lanes of the old city give Quebec a European flavour that I have been missing. I joined the hordes of tourists bimbling around Rue St Jean and stopped to be highly entertained by a busker capable of juggling 7 batons. (I’ve never seen anyone juggle so many.) The traffic was dammed by the meandering tourists and the occasional horse-drawn carriage. I found a beer but I have yet to find any poutine. 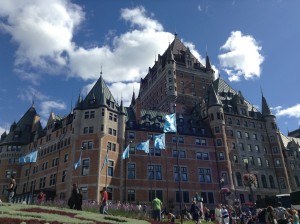 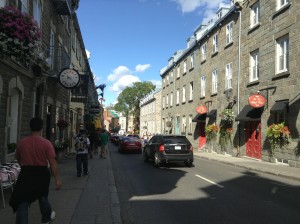