I must look as shattered as I feel.

I’ve battled with the cyclist’s nemesis: the wind. We fought for 45 kilometres. I wanted to go north north west. The wind wanted to go the other way.

The wind has two weapons: the push and the punch. The push is the softer blow. It is constant and, however hard it gets, your legs can adjust as you slip to a lower gear. The punch is a killer. The punching gusts hit you when you are not expecting. They wrestle you on the downhills and stab your knees on the uphills.

Battle commenced as soon as I crossed the Causo causeway that joins the mainland of Nova Scotia to the beautifully rugged Cape Breton. I turned left to the north north west, along the road that the locals call the Ceilidh trail. We fought up the hills and around the coast. Lace cuffs of surf dressed the coastal rocks and silky waves stretched to the horizon. A butterfly flew with me for a metre or two, it was encouragement enough. I was determined. 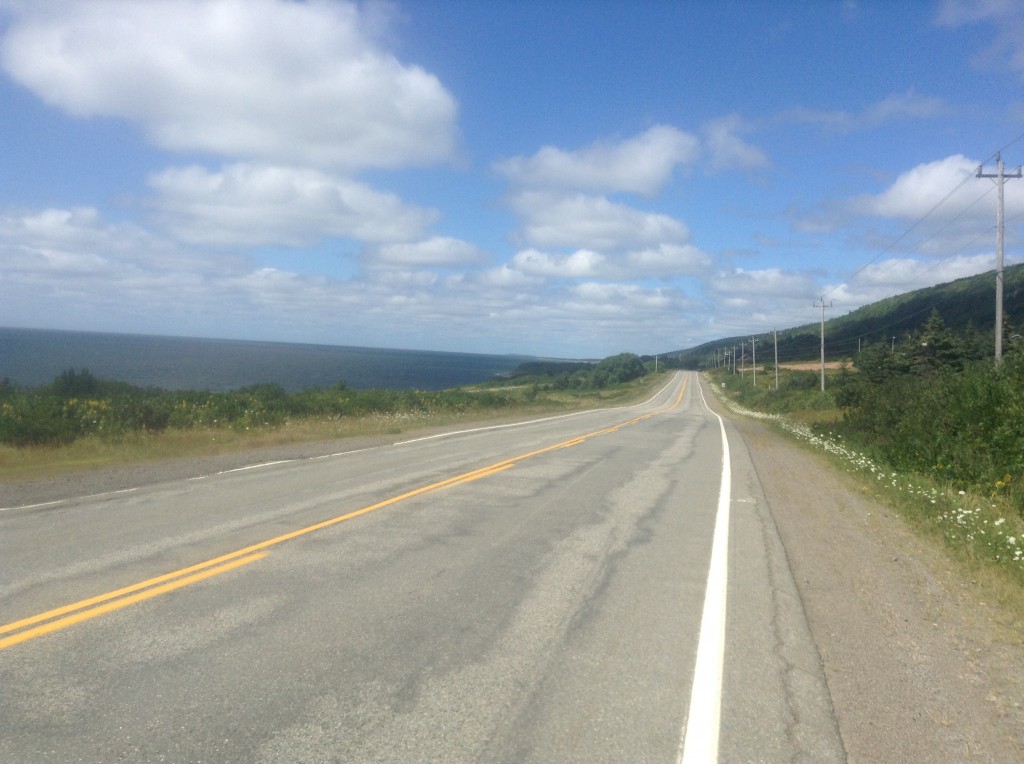 My speed decreased to a pitiful 15km per hour. And I was pushing with my all might. But after 3 hours of fighting, I saw the sign welcoming me to Port Hood. I’d won.

At the beginning of this trip I used to get asked for ID when I bought alcohol. I don’t any more. After 100km on the road I wheeled into the liquor store to get a beer for the evening. No ID requested.

The lady at the campground took pity on me. She had long red hair, green glasses that framed the kindness in her eyes. She must have seen how shattered I felt after my long day in the saddle. I paid for the night and she pointed me in the direction of the tenting area. Moments later she was pulling up beside me in the car.

“Follow me, ” she said with a Scottish lilt mingling with her Canadian accent. I followed her car to the back of the campground where three huts stood. “You will sleep better in here. You don’t have to pitch your tent and it will be quieter.”

I helped her move a picnic bench to outside my new hut. The hut is nice. It is wind proof. It is warm.

I’ve checked the weather forecast and although it’s due to be dry and sunny tomorrow I fear that the wind will be blowing in the wrong direction again. The battle will begin again.