I woke up to the sound of rain pattering on my tent. Oh well, I thought, turning over to catch another half an hour’s sleep. Oh eek, I thought, a second later jumping out the tent in just my underwear to rescue my bike shorts that had been left outside overnight to “dry” on Monty.

I found the Wanderers curled up in the washroom eating breakfast. This has become something of a feature of the trip: rainy mornings hiding in washrooms. The only plus side of the rain was that it wasn’t so hot. We’ve had a couple of really, really hot (over 30 degree ) days. It’s been tough to cycle in. The recent heat has also caused heat rash on my bottom. Specially, on the spots where bum meets leg meets saddle. Signs of it first emerged a couple of days ago. First I was a bit perplexed because it doesn’t look or feel like normal cyclist’s chafe. But it hurts. It feels like I am sitting on a stone. I climb out the saddle and sit down again, trying to find a more comfortable spot but it soon gets sore again. It made for an uncomfortable day’s riding all day.

After a very large coffee in Tim Hortons with Kat we set off cycling along muggy, drizzly highway. There isn’t much to say about the scenery today. Mostly just undulating hills, lots more traffic, a thin shoulder, some trees, some signposts, an overcast sky etc.

While cycling in northern Ontario I’ve been thinking of the plentiful wild camping opportunities. I feel like I should wild camp on this trip. Riding with Kat she told me the experiences of two guys who wild camped in Canada. Here’s why Kat is not about to wild camp in Ontario…

Reason #1: Kat met a man cycling across Canada west who decided to wild camp. He had left an apple in his tent. In the middle of the night a bear sniffed him out, swiped his claw through the canvas, grabbed the apple, starred the man down and slumped off into the forest. Eek.

Reason #2: Kat met another man cycling across Canada who decided to wild camp in the Middle of Nowhere. He was located miles from anywhere, hidden away in the forest, invisible from the road. In the middle of the night he was woken up by the violent shaking of his tent. He unzipped his tent to find a homeless man. “What are you doing?” The camper exclaimed. “I couldn’t open the zip,” the homeless man replied. Without further explanation he wandered off into the forest.

After 100km of riding I turned right off the highway towards Manitoulin island. I arrived in the town of Espanola and headed to one of the town’s 3 grocery stores to pick up supplies. Somewhere between the chicken and the fruit I bumped into the Wanderers. Then near the potatoes I saw Kat again. Outside, packing up Monty, I spotted another two cyclists who came over to chat. They are a slightly eccentric American duo cycling from Seattle to Boston. And then, just as I was packed, a small family cycling across Canada from Vancouver with their 10 year old son rolled in.

That’s right: 5pm on a Thursday outside a grocery store in a small town in northern Ontario gathered a total of 9 trans continental cyclists. It’s a small world. 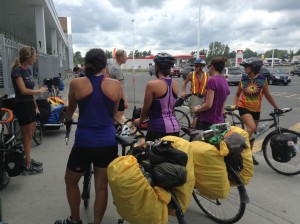 The cyclists hang out

Out of Espanola the landscape quickly changed again. It was hot, very hot. and the air smelt of wet grassland and salt. Suddenly it was very hilly. I rued the large amount of groceries I’d purchased as I pushed down into my lowest gears. 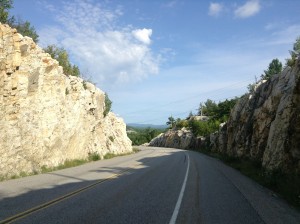 Headed towards Manitoulin the landscape become hilly and beautiful again

After a long day on the road the Wanderers and I swung into the campground. It was an odd sort of place.

“Is there a shower?” I asked.
“Only a cold shower,” the lady replied, “or you can just swim in the river. I think there’s an inflatable dinosaur down at the waterfront and you are welcome to make use of that.”
“And where is the washroom?”
“It’s in the stone building. Or you can just bag your loo paper and go wherever.”
Erm… Thanks.

I didn’t make use of the inflatable dinosaur, but I did go for a swim in the river. Some Canada geese were floating downstream, the light was lower in the sky, a number of coloured boats were lined up on the grassy banks on either side. It reminded me for a minute of swimming in the Thames.