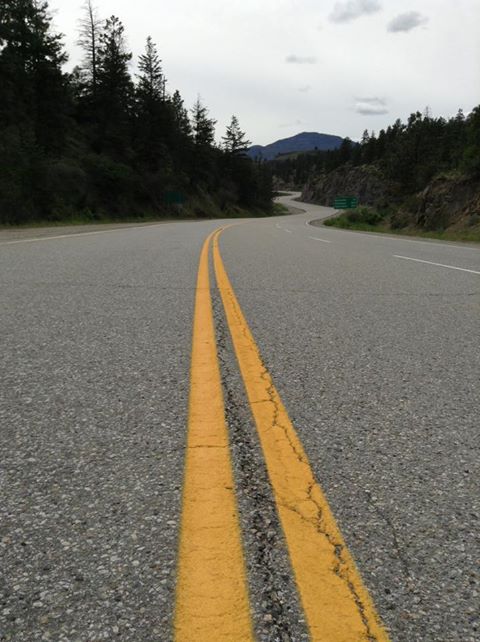 You would have thought that there aren’t all that many folks cycling across Canada right?

Back in Victoria John and Kumiko (who cycled across Canada in 2007) told me that one day in Ontario they stopped for breakfast with not one, not two but a gathering of eight trans-Canada cyclists. It seems pretty incredulous that so many cyclists would congregate at the very same spot at the very same time. Not so.

Today my cycle path crossed with another 7 cyclists all headed for the East coast.

Firstly, Nic, the guy from Quebec who I have cycled with since Mission, is headed to Nova Scotia. We parted ways this morning as he is following highway 3 to the crows nest pass whereas I am headed for the northern route towards Lake Louise, Banff and other tourist traps.

I stopped outside a snack shop with 2 cyclists outside. Stan and Shirley had stopped to get the best beef jerky for miles around inside the store. They are both headed for the east coast. Amusing they describe their trip as “one woman’s dream, one man’s nightmare!” But on a sunny day with only rolling hills and beef jerky en route I doubt it was too hellish for Stan. They too are taking the southern route via highway 3.

At lunchtime I was happily munching through my fourth Ryvita and Gouda slice when Chase and Erica pulled up. Their trip is slightly different because they are cycling for a month, then have to return home to work for a month, but will they fly out to where they left to carry on their ride. If they don’t finish it in 2 months then they’ll complete their cycle ride next year. I love their dedication.

I also narrowly missed (by 10 minutes apparently) the 2 “wanderers on wheels”. The wanderers also have a very amusing blog which I greatly enjoy reading; certainly they make me feel like less of a nutter for making this trip. I did actually met these girls briefly at Manning Park. In fact, I met all the above guys at Manning park!

If you think about it… There are only so many months in the summer when Canada is fun to cycle through. And you need most if not all of them to cycle coast to coast at an enjoyable pace. I hope to bump into these guys again, and meet any other folks who are also making the trip.

Anyway, aside from meeting loads of friendly cyclists, today I cycled 105km with swoopy hills. One hill was so swoopy it swooped for about 10k (or so it felt) and I hit a max speed of 57.7km/h (that’s v fast for a fully loaded tourer like Monty)

My favourite moment of the day though was seeing a signpost that read: Similkameen Taxidermy. Emergency and out of hours call: 350-123-000

I will leave that for you to ponder.