Cycling into the prairies

Cycling through the prairies could drive you slowly insane.

When we set off this morning the scenery looked like this: green fields on all sides, large dome of sky, grey strip of tarmac heading straight forward, a ceaseless line of pylons on the left. 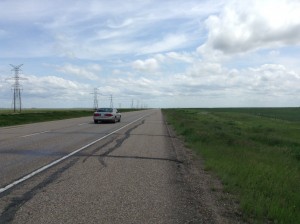 The prairies have just dulled my senses.

20km later and the scenery had not changed. An hour later it was still the same. Still the same. If I didn’t have the odometer on my bike I wouldn’t have believed that we were actually moving forward so endlessly monotonous were the surroundings. 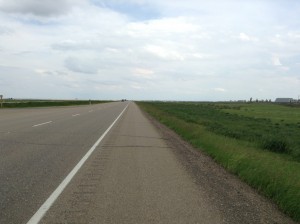 Dino: “caption for this picture?”
Sofi: “It looks the same as the other one”

The only excitement of the day came in the form of two birds. One plover and one wader (possibly a curlew sandpiper) which we saw in quick succession after lunch. I thought that the unchanging scenery was the mental challenge of the day- I was wrong. It was the wind.

After lunch the wind really picked up. The wind progressed from bad to awful. It was an east-north-east wind and we were headed directly east. Our average speed was battered by the wind. It dropped from 20km per hour, to 15km, to a miserably punishing 12 km. The distance between us and the campground seem to expand as our speed dropped. Oddly the land was slightly undulating. It was actually faster to climb the hills (marginally) as the incline of the hill gave us a precious bit of protection from the ceaseless wind.

Trucks rumbled past. A couple times today we felt ‘the suck’. The suck is the feeling of the vacuum around the passing truck – first the air current pushes you out and then it pulls you in like a tumbling ocean wave. It’s scariest when it pulls you over the rumble strips.

After 90-something kilometres of riding we pulled into the small town of Redcliff, a few kilometres short of Medicine Hat. The town isn’t much. It’s a small place where people drive pick up trucks and the wind kicks dust into your eye. But it has a municipal campground.

Thankfully the tornado warning for the area has now been lifted. Yes, tornado. However there is still a severe weather warning for overnight.

Upon arrival at the campground we inspected the cleanliness of the washroom. We decided that it was safer to bed down inside rather than camp out in the open. (The washrooms here are very clean.) The wanderers were going to sleep in the disabled showed until one of them realised that the shower was motion activated (!) so we’re now all bunking down in the disabled toilet cubicle. At least it’s en suite.

I write this blog post from inside the local tavern, having just eaten my own body weight in chips, burger and carrot cake. Outside the heavy rain, blasting wind and shaking trees do not look inviting. I am glad to be sleeping inside tonight.

Tomorrow we have another 90-something kilometres to ride. I really hope the wind is on our side. Our backside that is.