Isn’t it lovely to wake up in a bed?

I had the hostel dorm to myself and so had enjoyed an uninterrupted night’s sleep. Bed linen. A comfy mattress. Silence. No bugs. I fell asleep under the red glow of the emergency exit sign and woke only as the morning light crept through the gaps in the window blinds.

The hostel occupied an old lighthouse building. The outside of the lighthouse, neatly painted in red and white, looks just the part as it sits overlooking the widening Salmon River. The light on the lighthouse, I learnt, had only been turned off for the last time a few weeks ago. The light is owned by the federal government and they had switched it off as it the lighthouse was now redundant due to another light situated on the nearby wharf.

It was tempting to stay another day but I have a plane to catch and over a thousand kilometres still to cycle. So I pressed on. Goodbye lovely lighthouse.

Yesterday I had crossed a time zone but I pretended I was still in the old time zone to allow myself an extra hour in bed. On the road, the sun had already begun to heat up the day. The misty clouds that were resting over the houses on the far shore early in the morning had now vanished.

It was a beautiful day. I cycled along a quiet road bordering the coast. I could still see the far reaches of Quebec fading in the distance as the river gave way to the sea. A single sailing boat stood in the calm waters. A sign pointed to the crabs and scallops for sale. The houses were decorated with bright triangles of red, white and blue bunting. The Acadian flag swung out to the east, erected by the wind. I only missed Acadian Day by a day but clearly nobody had got round to taking down the decorations yet.

The Acadians are the descendants of the French colonists who live in the Maritimes. Along the Acadian shore of New Brunswick you are as likely to hear French spoken as English and most people seem to be bilingual. I am intrigued by the confusing accent they have here. Last night I was playing with my iPad in the hostel while a couple of folks chatted away in strong, almost incomprehensible accents. I decided to covertly record them speaking and felt very sneaky… Until I realised they were taking about me!

Mid morning I stopped for a gigantic maple walnut ice cream and sat overlooking the water. It’s the coast from here to the end, I thought. From here to the Atlantic. I could get to Halifax in less than a week but I am going to finish with a flourish.

Today passed without grand incident or hilarious mishap. It really been just a very pleasant day’s ride along the coast of New Brunswick. 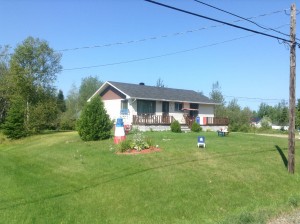 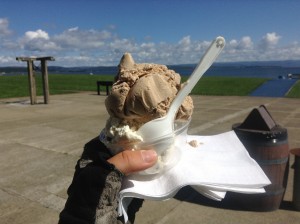