I was abruptly awoken when the bright motion activated lights were activated by a Wanderer wandering around the washroom. I can honestly say this is the first time I have woken up in a shower cubicle. It took a moment to get my bearings. I had slept very well (bar for the usual midnight midgy bite scratching fest) whereas the Wanderers had barely had four hours of sleep between them.

“Were you not woken up by the hailstones crashing on the roof?”

Nope. Turns out that even if you’re sleeping in a shower cubicle you can still snooze through apocalyptic hailstorms if you have used micropore tape to seal your ear plugs in (top tip from the road).

We were all glad not to have slept outside. I guess the awful weather that had showered, thundered and crashed on the washroom roof would have been far, far worse in a tent. We are also extremely, extremely lucky to have already passed Canmore and Calgary. You’ve probably already seen on the news that the main highway (which we’d cycled on just a few days ago) had been closed by the severe floods. My thoughts go out to those who live there.

On the road we headed due east (as usual). The wind swung east south east and then swung again so it felt like a complete headwind. Fractional differences in the direction of the wind really push down or pull up your average speed. The winds here can be so exhilarating and depressing – and you cannot even see it.

After a couple of kilometres we were looking for a spot to eat a protein bar when we saw Stan and Shirley ahead who were fixing a puncture. (Stan and Shirley are a couple from the Okanagan who are biking across Canada.) We stopped to exchange stories from the road.

We cycled happily until lunch (not withstanding Katie’s flat tyre and panic attack) and were grateful that it was sunny and the threatened thunderstorms did not appear. Over lunch the wind changed direction. You could tell by the Canadian flag flapping overhead outside the tourist information where we sat (tourist info for what exactly? The place we were in, which you could hardly call a village, consisted of a gas station, a trucker restaurant,one house and the tourist info).

At lunchtime I thought I saw the woman who had served us at the tavern yesterday evening. When she came over to put some rubbish in the bin I greeted her in an overly enthusiastically friendly. “Hey, how’s it going!”

Oh, it’s not the same woman. Still she was friendly and asked where I was biking to. She had a friend who cycled across Canada a couple of years ago. We chatted. She wandered off. Five minutes later she was back again with a piece of paper in her hand.

“If you get to Kakabeka Falls then you can stay with us,” she said handing over the piece of paper. “We don’t have a spare room but you can sleep in the living room. And, you know, have a warm shower. We have a sauna too.”

I remember asking Kumiko back in Victoria what she thought was the best thing about cycling across Canada. She paused for a moment. Then replied thoughtfully “the kindness of people.” I would agree.

Shortly after lunch we arrived at a huge signpost announcing our arrival in Saskatchewan. We pulled over to take photos. The sun was now shining, we had a tail wind and the two trimmer that had just gone by threw off the smell of freshly cut grass. I could really like Saskatchewan. 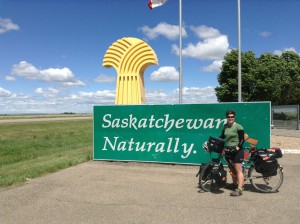 Just as we were about to push off Sofi tripped and somersaulted off her bike. This is no exaggeration. From basically standing on a static bike she managed to land on her head and scratch her helmet. We were worried that she might be concussed. Still miles from anywhere this was not good. After another 10k of cycling we stopped so Sofi could rest as her head was hurting. Luckily she didn’t feel nauseous and painkillers and fizzy cherry sour sweets seemed to do the trick.

The scenery today has actually been quite exciting. We’ve had a couple of rolling hills. Apple green fields. Cows. Hardly any traffic. I felt like to could cycle for ever. In fact, I ticked over 1500km today. 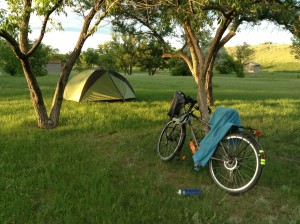 Our campsite for the night. Monty doubles up as a washing line.