Today’s cycling has been some of the best yet. Not least because rather than slogging away for 6 hours+ on my bike, I have ridden only 85km. Today i followed the coast of Georgian Bay, passing through small, hipster-looking towns and meandering along a bike trial in the sunshine nodding at fellow cyclists. Today I passed through the so-called Blue Mountains. Although I could see a few ski runs, the mountains didn’t seem to be very mountainous. Nonetheless I enjoyed the views of the blue water of Georgian Bay that I glimpsed through the apple orchards and was intrigued by signs for various wineries.

After 60km I stopped in Collingwood to go on a small spending spree. Having lost my sunglasses a few days ago and with lots of sunny days ahead (including my 3 day canoe trip this weekend) I needed some new ones. Given there’s no one here to talk sense to me I decided to splash out. And given that there’s no one here to tell me how silly I look I decided to get some silly ones. 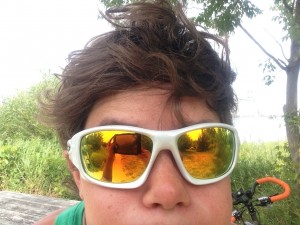 More sensibly I also purchased a new vest top. I have realised that my once apple green icebreaker top is turning the colour of stagnant pond water (and probably isn’t far off smell-wise either). And the white Rapha top which was brand new before I left looks like it has been swimming in coffee. I should point out I do launder my clothes at every opportunity (about once a week) but there is no hope for clothes that have endured over 4,500 kilometres of sweat, suncream and thunderstorms.

All in all I spent a ridiculous amount of dosh today. I was very tempted to buy a Go Pro but realise I should have asked brother Dan (who is expert in such things) for advice and a demo before I left for Canada. I could imagine buying one only to return to England with a month’s worth of footage of the lens cap (or equivalent stupidity). Yet I am sorely tempted as the Go Pro could gather wonderful footage of Me Cycling On Monty and who wouldn’t want to watch that for 100 hours unedited?

Despite a few patches of busy road traffic the cycling was glorious due to the relative cool weather, flattish terrain and views of Georgian Bay. After a mere 80km I stopped at a Tim Hortons to Skype with Ruth (who embarks on her next leg of Land’s End to John O’ Groats, ie top to toe of UK, tomorrow). After yesterday’s disappointment I decided to get a beer to finish the day. At the check out I was asked for ID. When I presented the man with my UK driver’s license he proceeded to get out a tome detailing all the IDs of the world (such a thing exists?!) He is not the first person to be wholly confused by a UK license that says “CANADA” on it (ie place of birth). 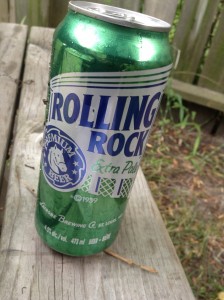 A quick Google search narrowly saved me from staying at the self-proclaimed “party campsite” of Wasaga. A campground that boasts you will “make friends” while partying to its own live DJs etc. Wasaga, I should point out, appears to be the Canadian equivalent of Newquay: the place where young folks come to comatose themselves with cheap alcohol, acquire tattoos and/or piercings their parents will despise, and lose their virginity on the sandy beach. Hmm.

I cycled along the beach front road and recalled when I was last here. When I was 18 years old I came to Wasaga beach with two girls from Toronto. Then I thought myself the epitome of cool as I watched the sunset while floating on the lake atop my newly purchased pink inflatable sofa. (That was my one and only outing with said pink sofa which I shortly after gave to a student in Toronto). Today I passed the ice cream parlours, body piercing stores, bars and pink inflatable stores without wishing to go inside. Despite my Google searching, the “family campground” I am staying at bears a close resemblance to a music festival: tents pitched haphazardly on a misshapen patch of grass, portaloo in the corner, shower cubicle festooned with clusters of someone else’s hair, miscellaneous dance music crackling from poor quality speakers, man over there naked bar for magenta shorts etc. I was even given a purple wrist band when I arrived.

I was thinking about taking a rest day here but Wasaga makes me feel old. I do not care for the live DJs, foam parties, or recreational drugs on offer. Give me the quiet lakeside spot where the loudest noise is the call of a loon, and the night air is filled only with the smoke of my smouldering campfire.

The best thing about cycle touring is that I can leave tomorrow. In search of my loon and campfire.