As a general rule of thumb, in Canada the cycling days have been glorious and the rest days have been spent wishing I was on the bike. My ride to Sainte Marie de Kent and subsequent rest day broke that rule, in the nicest way possible.

The day’s cycling was fine but largely uneventful. There had been no threat of rain so I’d slept with the tent flaps open and thus had a bone dry condensation free tent to pack up in the morning. Monty and I set off along the main highway. The highway isn’t actually very exciting. Is just a strip of grey Tarmac that bounces up and over the hills and through the forest. Every now and again I would pass through a small village decked out in Acadian flags. Some villages had painted the trunks of their electricity pylons in the Acadian colours. They really are quite patriotic.

All around I could smell the piney, green fragrance of the forest. Soon enough I arrived in the town of Richibucto where the fragrance of the forest was interrupted by the strong scent of the sea. An aggressive line up of gulls watched over me while I ate my lunch by the small harbour. After a short snooze, ended by an extra loud screech from a gull, it was time to get pedalling again.

My lodgings for the night came into view down a long, bumpy track cutting between a riot of wild bushes. I was essentially in the middle of glorious nowhere. At the end of the track, a large trailer stood in front of an old white house. Aaron, Shelley and their young son were out at a farming conference when I arrived but I was greeted by a very cheery note and muffins. 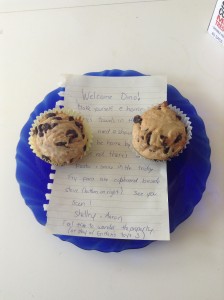 I wandered around the back of the house to where a line of washing was hanging up. There was a very large veg patch, stuffed with tangled towers of green beans, green tomatoes, neat lines of onions bursting through the soil, and a lively proliferation of leaves and squashes exploding out the patch. I went over to say hello to the chickens and the three goats (named Hans, Goat String and Tweedledum).

As it fell dark I set about gathering kindling for the fire. A bright full moon cast bean-pole shaped shadows across the freshly mown grass. A chorus of insects buzzed in the background as the pop of the fire flung sparks into the sky. I chucked some grass on the fire to create some smoke to deter the bugs. It gave off a nice smell too. Aaron and Shelley came out the house and sat by the fire. We toasted some marshmallows. It grew late, though no darker thanks to the moon. When Aaron and Shelley retired to bed I snuck into my sleeping bag and fell asleep with the brilliant moon arching south west across the sky. The birds had stopped singing, the chickens had long since gone to roost, the goats bleated for a while but soon quietened down. Only the faint chorus of insects, their buzzing amplified by the silence, remained.

I was woken up when the cockerel called. The sun hadn’t yet risen but the eastern sky was a palette of artist’s colours. Wandering around, capturing the morning light on my camera I woke up the goats who jumped up on the fencing bleating. I worried they might escape again.

My rest day was perfectly restful. In the morning we went blueberry picking and in the afternoon we went on a successful forage for chanterelles. After that I had a lazy nap under the mosquito net until it was time for dinner and therefore time to munch the chanterelles. In the evening I again fell asleep under the gaze of the moon. The only difference this evening was that the evening soundscape missed the bleating from the goats. Hans, Goat String and Tweedledum had, just before dinner, been picked up by the butcher. They will return in freezer bags.

I couldn’t have wished for a better rest day and am very grateful to my kind hosts for having me stay. 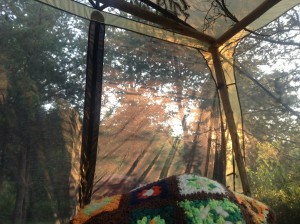