I haven’t eaten enough pancakes or maple syrup on this trip. In fact, before today I don’t think I’ve eaten any pancakes and only a small amount of maple syrup has entered my mouth, mounted on some other variety of wheat-based foodstuff.

This morning at the campground I met a nice man wearing a triathlon tshirt who, it turns out, has done no fewer than 3 ironman triathlons. And he is training for his 4th. I have by this point decided that doing an ironman shall be my next challenge. So it was good to chat to him and hear his tips.

Heading out of the Soo, I’d been advised by the folks at the bike store to take the scenic route off the main highway. I’d also heard that it was going to be “flat”.

It was not flat. Okay, there were patches of flat but the gravel road I was on managed to seek out every bump and hill and traverse them at the worst possible angle. For the first time since Vancouver I also had to – shock, horror – navigate. Usually I am on the same road for the entire day. Or entire week. The twists and turns (okay there were only about 6) had me reaching for the GPS which slowed me down.

Nonetheless it was the scenic route and in hindsight I’m glad I took it. I could enjoy the pastoral scenes as I passed through Mennonite country. The landscape had changed significantly since yesterday. Gone are the rocks and forests. The scene today was agricultural with views of wooden, red-painted barns surrounded by fields of fresh hay bales. Swallows dipped and dived over the crops while a flock of sparrows flew from the water tower. All day I saw road signs warning drivers of horses and carts (which also served to warn me and Monty of the house droppings on the road…) And here and there along the roadside were small stalls selling fresh eggs and maple syrup. 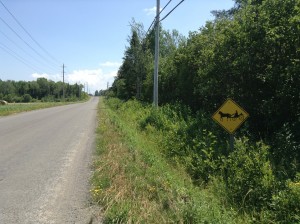 Maple syrup! How have I been in Canada for so long and not eaten more maple syrup? Thinking back I can only recall eating maple syrup on French toast back in Hope. That was over a month ago. Outraged by my lack of the sweet stuff when I rolled into town and saw Kat in a restaurant I decided to rectify the situation. And the maple pancakes tasted so good. Nom nom nom.

The Wanderers rolled into the restaurant a short while later and we rested for a a while from the heat of the day. The four of us set off together but soon our different speeds split us up. I was feeling good from the pancakes so kept riding. I have realised from the last few days of cycling by myself that if I feel good I should not stop. After all the pancakes (and a few energy gel sweets) I felt very good. So I kept going…

And going. And then I realised, rolling up and down the smooth undulating terrain, that I could do 50 kilometres without taking my feet of the pedals. So carried on. At this point I figured out how to swap round a third water bottle so I could carry on drinking while riding. And I kept pedalling,

I arrived at the campsite just outside of Blind River having cycled 67km without a break. Which I guess is about 3 hours of continuous exercise and thus some sort of personal record.

Kat and the Wanderers pulled into the campsite a little later. We hung around, eating dinner together. It was a nice end to very good day on the road. 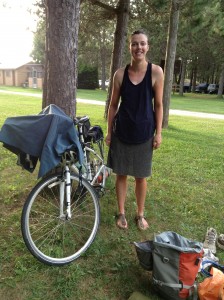 Ps Kat’s blog is www.katstanbridge.wordpress.com
The Wanderers’ blog is www.wanderersonwheels.com