You know you’re having a tough day when the generosity of someone giving you a square of tin foil nearly brings you to tears.

The tin foil, I later discovered, wasn’t actually necessary anyway as the corn on the cob was still wrapped in its husk. (The husk, Google tells me, is sufficient protection when tossing a corn on the cob on a campfire.)

At this point it was about 3pm and I was in a grocery store stocking up on the necessary ingredients for a delicious and cheering campfire meal. I needed a cheering campfire after today’s awful, awful, AWFUL ride along Highway 11.

This wasn’t the Road to Hell so much as Hell Itself in highway form. The four-lane highway was very, very busy with cars and RVs headed north from Toronto. The cars zoomed past at terrifying speed. In fact, forget my description – just imagine the M1 on the Friday afternoon before a bank holiday. To make matters worse, the paved shoulder I had to ride on was about 6 inches wide. 6 inches.

I was cycling along at some ridiculously fast pace – fear clearly strengthens one’s leg muscles. I pedalled in a state somewhere between abject fear and gritty, determined focus. I was hungry. I had already done 60km and eaten little more than a protein bar all morning. I had been on the Highway of Hell for over 10km. Every second was terrifying.

Cars honked at me. (Yes, because adding to my state of witless terror by startling me with a blasting horn is going to help!) Trucks screamed past.

I scanned the roadside looking for somewhere to eat lunch. I spotted a gas station ahead. there was a patch of grass and a tree under which I could shelter. I peeled off the highway, hungry and shaken. I sat curled in a ball, eating my avocado and crackers off my knees, and worried about what to do next. The clouds threatened rain.

Google maps showed a possible detour which took an extra 20km. But were those side roads really roads or just bumps of exhausting gravel? I was scared of the solitude of empty, forest roads. But even more daunting was the prospect of cycling alone along the M1. Either way, I needed to push on up the highway for another 6km before I could pull off.

At the turn off I pulled up at a small grocery store. Inside the store I collected food for my campfire. “Excuse me, do you have a piece of tin foil i could have for cooking this in a campfire?” i asked the woman at the store, pointing at my corn. When the woman returned with a square of foil I nearly cried in gratitude. The kindness felt like a cloth had been lifted from my body, unveiling my vulnerability.

With 40km to go I entered the back roads of the forest. The scenery had changed again. The thickening forest, wet grasses, rocks and sudden, sharp inclines told me I was back into northern Ontario. The dense forest was pierced by the grey road as it twisted and turned through the wilderness. Although relieved to be away from the highway, the solitude of the wilderness and the looming grey clouds cast a darkness over my mood. Was that the sound of an aeroplane? Or the long, distance rumble of thunder?

Here the wild things live. This is sort of place where the only soul you are likely to meet is a lone man with a gun. Or a bear (if bears have souls. A topic for another discussion perhaps). I sang to myself for comfort and cheer. And dipped into my pannier for a handful of my emergency Jelly Belly beans. For 40km I pondered the wild idiocy of my decision to cycle across Canada. I still have to get to Kearney by Friday morning and that means either going back on highway 11 or another lengthy detour.

Finally I arrived at the campground. It is expensive. I even upgraded to a site with electric. But I don’t care. This wasn’t supposed to be terrifyingly hideous. It was supposed to be “fun.” Yes, it was going to be a challenge but I had encounter enough challenge today. I have my own water tap, my own electric plug, a campfire, lots of firewood and a nice, dry tent. This, I consider, is the height of luxury.

I cooked maple syrup flavoured baked beans (nice, but oddly sweet), spider dogs and roasted foil-and-husk-wrapped corn on the fire. The sunset. The clouds parted to reveal a scattering of stars. I sat cross legged watching the embers of my fire glow. The worries of the day melted like the marshmallow turning to goo in my hot chocolate.

Thankfully the Road of Hell led to something rather heavenly. 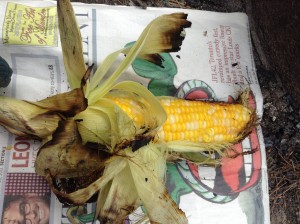 Campfire, Cycling across Canada, Ontario, why am I doing this?