I glared. Not far for you, buddy.

This man, short, portly built with inset eyes and an annoying accent, had asked me how far it was to the Gaspe. How far? It’s a large peninsula, you idiot. That’s like asking far is it to the south west. I had initially taken him to be American because his manner so smoothly combined ignorance with self importance. I’m sorry to say he was actually from Ontario.

Once I had established that he meant how far is it from here (small picnic bench on rainy roadside 25km north east of Rivière du Loup), all the way around the peninsula along the coastal road and back to here, I told him it was “several hundred kilometres.”

“Where are we?” he asked. He had spread my provincial map across the picnic table and was now leaning over, studying it with purpose.

“We are here,” I said, pointing at the map, “and Rimouski – here – is 80km. So around the Gaspe will be several hundred kilometres.”

“It’s several hundred kilometres,” I replied tersely, neglecting to tell him that it would take me the best part of a WEEK of cycling in a freezing headwind to get around.

It had just started raining again so I folded close my panniers while the man continued to pour over my map. He started writing notes on a post it. So far I had cycled 25km. The north easterly wind had picked up force, muffling my ears and struggling my slow progress. It was cold. Too cold. I was wearing my arm warmers and gilet. My buff was wrapped around my head but I was still cold. i had just cycled past a nature reserve famous for its shorebirds. I had been looking forward to stopping and taking out my monocular to enjoy the wildlife but today, punching into a bitter wind, I kept on glumly cycling. If I stopped I would only get too cold. And in this weather the birds are probably hiding.

“Oh, it’s not far,” he declared for the THIRD TIME.

My eyes narrowed into malevolent slits. You said that again and I will swipe you. The man wandered off.

I cycled. It was cold. It was raining. And there was a headwind. I cycled to Rimouski, that 80km-from-here place. It’s not far.

My foul weather mood was punctuated by only two moments of amusement on the road:

1. Celebrating the 6,000km mark on the cold, windy roadside by chomping on 6 squares of Kendal Mintcake that, yes, I have carried in my pannier for the last 6,000km.
2. Discovering what happens to a mini packet of Haribo when it is squished into a hot pannier bag for over 2 months. The single Haribo slug still tastes the delightful same.

I am now in a private hostel room drinking Earl Grey tea (thank you Clayton and Catherine) and a box of chocolate chip cookies. 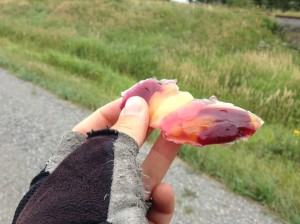