Lessons from the road: how to keep going

Today I feel like I’ve earned my colours. If I started today as a rookie cycle-tourer who tries hard then I finish it as an intermediate who succeeds even when it goes wrong. Let’s be honest, today wasn’t my favourite day so far. Nor was the cycling the most enjoyable. I am now too tired to feel any emotion other than tired (if tired can be an emotion rather than just a state).

Today was the day that I pedalled off by myself as the Wanderers (my companions for the last 2 weeks) wandered off because one of them really didn’t feel very well and said I should go ahead.

Today was the day that I left Saskatchewan and entered Manitoba. Today I crossed a time zone without realising it because there wasn’t a sign. And I didn’t figure out I’d lost an hour until I noticed that my cellphone and iPad were displaying different times.

Today was the day when I said goodbye to the nice tarmac shoulder my wheels have been hugging for weeks and bumped into the gravel shoulders of a new province. Today I swore under my breath to the provincial government that couldn’t be bothered to build decent roads when Saskatchewan’s could.

Today was the day I decided that it is legitimate and probably quite wise to put your bike into a pick up truck when the town you wish to cycle through has experienced a 297mm deluge of rain in 3 hours. Today I figured out that it’s okay (and still counts as cycling across Canada) if you have to get a lift for 20km because the flash flood has meant that the houses are being pumped, the power is out, the highway is closed, the surrounding roads are swamped bumper-high in water, the cows are floating in the fields, and the government has declared a state of emergency in southern Manitoba. 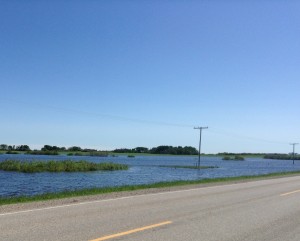 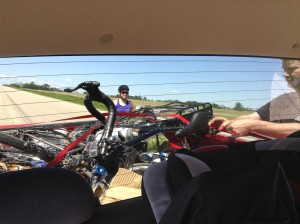 Picking up a passing Wanderer to avoid the floods.

Today was the day that truck dodging become a reality. When sod’s law dictated time and time again that even though the road was quiet if one truck appeared behind you then another would appear in front. Today was the day when I quickly learnt to estimate which one would arrive first, to identify from the sound of the rumbling wheels whether the truck behind was pulling out, whether the other would brake, whether it would be better to pedal faster, slower, or to give in, screech on the brakes and make a 6 inch dive down onto the gravel verge to avoid a collision (either with me or between the two vehicles).

Today was the day that I held on tight when the oncoming trucks blew a swirling furnace of grit into my face. Again. And again.

Today was the day that the wind behind me managed to turn into a strong cross wind. When the road meandered north for no reason and I had to tack like a hopeless sailor to get just a few kilometres north before the road bent back east.

Today was day 5 on the trot of pedalling (I haven’t had a rest day since Swift Current). By lunchtime I’d done 87km but it was 3pm and I was beginning to feel tired and stiff. Today was the day my right knee twinged in a sharp and painful way. When I thought for the first time of emailing the osteopath/physio back home but realised I had no cellphone coverage. And that by the time I did it would be the weekend (and she told me not to get injured at weekends.)

Today was the first time in over a week when I climbed up what could reasonably be called a hill. I actually had to use my small front chain ring.

Today was the day when in the process of diving into the gravel to avoid a truck (and using that moment in the gravel to discover I had no cellphone service) that I was bitten in the ankle by a mosquito. And then bitten lots more when I arrived at the campground. And then discovered that mosquitoes round here can bite through your shoes (!)

Today was the day that I discovered a new use for my buff as a knee bandage used to hold the deep freeze cold patch onto my painful kneecap. 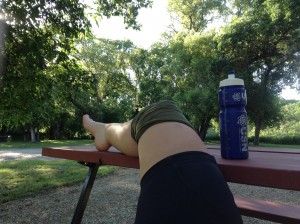 The buff solution: for when I felt, er, weak at the knees

Today was the day that I grew tired of arriving in the Middle of Nowhere. When I became bored by yet another small, dusty, pot-hole ridden town that only consists of a gas station, a patch of grass, a few houses and more gravel and dirt.

Today I decided that wanted to be Somewhere. And so decided that I will cycle to Winnipeg tomorrow. It’s 200km – further than I’ve ever cycled before by a long shot and now on six day old legs with a knee begging for a rest. But there’s Somewhere at the end of it. Somewhere with a hot shower, a cold beer and a familiar face who I am looking forward to seeing again.

Today I decided that this cycle across Canada marlarkey is worth it. Every truck, every gravel dive, every mosquito bite and every pedal stroke: today was a lesson in how to keep going.