Yesterday I wanted to crawl up into a small ball and cry. I hope that is how the Great Adventurers of the World all feel when they are about to embark on the adventure on a lifetime. Anxious dread seeped through me like I’d been dunked into a bottomless ocean.

What on earth am I doing? I packed up my panniers, trying to pretend i was only going as far as Victoria and was not about to set off 7,500km across a continent.

I spent my first 3 nights with a lovely couple of outdoor enthusiasts, John and Margaret, who were invaluably helpful to me. Together they helped me fix Monty, sort out a few things, allowed me to recover from the awful jetlag and still have time to see something of Vancouver (even though it rained!) They were such kind and wonderful hosts, encouraging me with stories of their own adventures of hiking and cycling. And yet the dread set in….

John kindly drove me to the ferry port. It was raining. Cycling didn’t seem a particularly inviting prospect.

Off the ferry at Vancouver island I cycled the 16km uphill to meet another adventurous couple, John and Kumiko. In 2007 they cycled across Canada. More amazingly they cycled from their home to Halifax in only 79 days, taking only 4 rest days. They did it aged 67. I was keen to hear of all their adventures and tales from road but first I had some cycling to do. John bundled me and Monty into his van and we headed down to Mile 0. 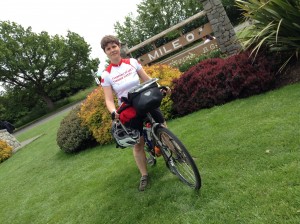 This is it. After 8 years of dreaming, 3 years of saving, 5 months of planning – here I am at Mile 0. Monty and I went down to the pebbly beach to dip Monty’s rear wheel in the ocean. John (of Vancouver) had advised me not to dip too much – salt water and bicycles don’t mix. 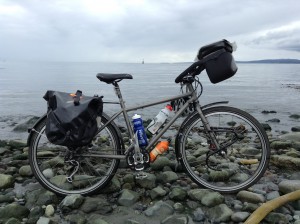 Monty’s next dip will be in the Atlantic

And then we (we = Monty and I) were off. It was a pleasant 30km from Mile 0 back to John and Kumiko’s house almost entirely along dedicated traffic free bike route. Yes it was raining, but I was now in high spirits.

BC, Cycling across Canada