Bikes have wheels not wings – they are not designed to fly.

So young Monty was feeling quite nervous about the prospect of being wrapped in foam and packed into a polythene bag for a 10 hour flight. We were both nervous about the flight given the horror stories of baggage and flying and the danger that I might fly to Vancouver while he jets off to Toronto or Dubai…

I was greatly relieved then to see his shiny wheels appear on the oversized baggage pick up in Vancouver airport. Phew. However, my relief however didn’t last too long.

Two friendly Canadian cyclists, John and Margaret, came to bike me up at the airport. Despite having never met, John was easy to spot because he was the only man at the airport wearing cleats. John and Margaret helped me unwrap Monty, slicing off the cable ties and padding, pumping the tyres and reattaching his wheels.

“Er… That doesn’t sound right,” John remarked, turning the rear wheel. The mudguard was rubbing in the tyre and it took a moment to notice the damage. The rear rack was bent out of shape and parts that were once welded together were now broken apart. Poor Monty looked like this: 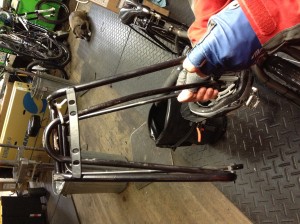 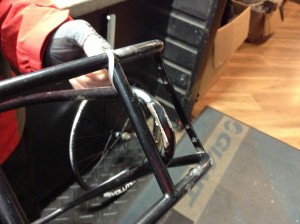 We set about fixing Monty sufficiently for the cycle home. A couple of adjustments and cable ties held the mudguard away from the wheel so it didn’t rub. It worked for the 13.2 cycle ride home in the rain but it wasn’t going to last me for the 7,500km…

The first time Monty got scratched I freaked out. He was scratched, incidentally, by travelling by train. (There’s a pattern emerging here..) but this time although the damage was much worse I was calm and already thinking of the solution.

The solution appeared after lunch. John and I rode to the local bike shop and explained the “emergency”. The guys in the bike shop were thankfully not too busy and able to attend to Monty right away.

The rack was beyond repair (or at least beyond repair given it has 25kg to carry for 3 months!) so a new rack was in order. “Wow, that’s a high end rack,” one of the mechanics commented while hunting around for a suitable replacement. Thankfully they had one Tubus rack in stock.

About an hour of fixing later (which included bending the mudguard back into shape) and I parted with $150 before wheeling Monty out. Yep, it wasn’t cheap and indeed Monty’s mudguard is now partially affixed by cable ties which looks a bit naff.

But it’s sorted. And so I have learnt a few lessons:
a) contingency money was a wise idea (although a shame I needed to break into it on day one!)
b) cable ties solve all sorts of bike problems
c) bikes aren’t meant to fly

Monty’s big bash has made me realise how much I will need to be careful about looking after him on the road. But now he’s fixed he’s really for a more metaphorically kind of big bash- namely the adventure of a lifetime!