Last night I met Tina at the campground. She’s biking around Ontario and we stayed up late (ie 10.30pm!) chatting, barely visible to each other in the dull light of a single orange glow stick. She asked me how my tour had been so far.

Note to self: do not tempt fate by saying silly things like “I’ve never had a day of continuous day.”

In the night I was woken up by rain. The flaps of my tent were already flapped down so I just rolled over and was lulled back to sleep by the pat-pattering of rain on canvas.

In the morning I was woken up by the rain again. The pat-pattering had become louder. I peeked out through the zip. Oh. The sky was a bleak sea of grey. I dug out my waterproofs and crawled out. If ever there was a reason to get out of “bed” and step into the rain it was this: maple syrup and pancakes. Did I not tweet my wish for maple syrup and pancakes yesterday? God is clearly on twitter.

I wandered over to Tina’s picnic bench with my French press (translation: cafetière). While Tina rustled up some of Aunt Jemima’s finest, I cut open a new bag of fresh coffee. We may be in a public park, we may not have washed in days, it may be pouring with rain but we can still eat breakfast like it’s Christmas morning.* 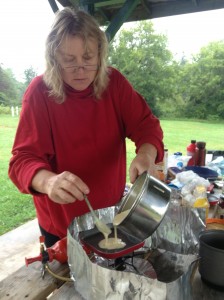 It was still raining. In fact, the rain seemed to have got wetter. I wandered back to my tent to discover, uh-oh, I had left one of my bike shoes poking out the tent all night. It was now soaked. Well, I guess they will both be that wet soon, I thought, wringing out the drenched sock which had resided in the shoe overnight.

I rolled up half a pond of water in my tent, clipped on my panniers and merrily cycled off with splashing tyres. It might be raining, but I had 95 kilometres of bike path to look forward to. The route verte (green route) is a huge bike trail that stretches all the way across Quebec. I would join it only a few hundred metres from my campground and only have to leave the bike trails again for a few hundred metres in Ottawa. After all this time cycling on highways it was bliss. Even the strengthening rain couldn’t dampen my spirits.

By 2pm I reached the outskirts of Gatineau and stopped by the beach for lunch. The beach was deserted save for a lone seagull eyeing me suspiciously. The snack kiosk was empty of customers. The only people in sight were a laughing group playing on the Ottawa river. Some were in motor boats, a few were on windsurfers, the majority were in kayaks and a few were out of their kayaks and squealing in the water. I imagine those in the water were equally as dry as those on it.

I watched the water folk splashing around while I munched my daily allowance of avocado and crackers. Munching cracker number one I could see the buildings on the far side of the river. But by cracker four the clouds rolled in again. Ontario disappeared in a damp, grey fog as the river met directly with the sky.

Back on the trail I enjoyed a wonderful final 30km to Ottawa. The bike trail was smooth, clean, signposted and surprisingly empty except for a handful of very keen folks skating along with ski poles (off season cross country skiers, I assume.) I couldn’t stop smiling as the familiar view of Ottawa rolled into view. Parliament! The Rideau canal! Yes, i was soaked like a drowned rat but I was dreaming of the hot shower and warm bed that awaited me. 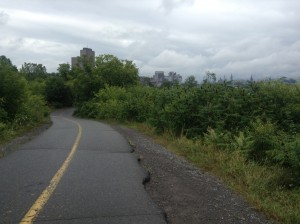 Glorious bike path to the capital. Note roof of Parliament poking through the trees.

On cue, as I rolled into downtown Ottawa, the clouds parted to reveal a warm blue sky. The sun warmed my prune-like, waterlogged skin and dried my drenched clothes. 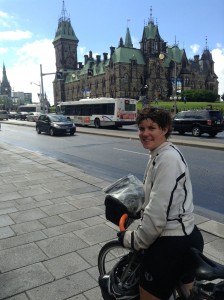 I still had time to nip to Byward Market to get some beavertail. Beavertail is what you might call a local delicacy, although it is anything but delicate. It is deep fat fried cake-like pastry smeared in any number of artery-blocking toppings. I ordered one and demolished it. The dripping butter tasted so, so good. So I ordered another. I was tempted to go for a third but figured it might ruin my dinner. 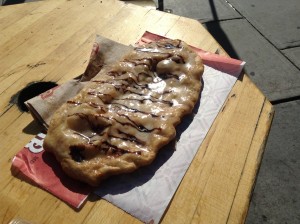 Fuelled by beavertail, I pedalled alongside the Rideau canal to the house of my lovely hosts, Dale and Natalie. The sun was now shining enough that I needed to peel off my wet jacket and stick on my silly sunglasses. Because, after all, it never rains continuously for a whole day.

*in the Rock house we eat Canadian pancakes for breakfast on Christmas morning.