Chateau Lake Louise is pretty impressive. Seriously if you’ve not heard of it you should look it up. The wanderers had a spare bed in their €750 a night room so had invited me (and Monty) to stay with them. I’ve not been sleeping much in Canada and was looking forward to a decent night’s kip.

There was a moment wandering around the sixth floor hunting for room 6923 and still (after about an hour) unable to find the wanderers when I was beginning to wonder if it was just a big wind up. There weren’t any rooms with four digit numbers. I’d been told to find the East elevator and was hopelessly trying to take a bearing from the sun in order to work out which way was East. To no avail. Eventually Sofi Wanderer found me sitting in the lobby. I was trying my best to look inconspicuous in a five star hotel whilst wearing trail running shoes, shorts and a bright red waterproof. We picked up Monty and whisked him inside on the elevator without anyone noticing.

The view from the view was impressive. 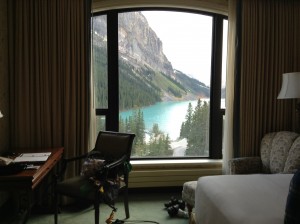 Room with a view

Oddly I had the worst night’s sleep. The bed was so soft and squidgy that I constantly felt like I was sinking. I woke up again and again. At 3am I couldn’t get back to sleep. I was very tempted to blow up my thermarest and sleep on that but worried that noise of inflating it would wake up the Wanderers. Eventually I did get to sleep by lying upside down on the bed with a pillow between my legs.

6.30am – time to go swimming.
There is only going to be one morning in our lives when we have the opportunity to swim in the crystal glacier-fed waters of Lake Louise and then sink into a hot tub: this was that morning. The water was so cold that “if you threw an ice cube in the water it would stay there”. We crawled in like Golum over the wet rocks, swam about 10m and then Golumed out again. We padded down the carpeted corridors wrapped in towels trying to find our way through the labyrinth to the hot tub. 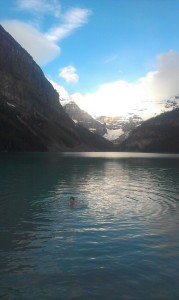 I’m going to start a list of lakes in the world I’ve swum in. Lake Louise joins Lake Baikal.

8:15am – breakfast
The cheapest breakfast on the hotel menu was €18. But we are but humble cycle tourists. The girls had only beef jerky and one protein bar in stock so I shared out all that I had. We were limited to 3 crackers, one third of a spoon on peanut butter scrapped as thinly as possible, two thirds of a banana each and a mug of coffee. We ate like peasants in a palace.

11am – actually doing some biking.
Our cycling route to Canmore was supposed to be ‘all downhill’. Katie Wanderer was looking forward to an entire day of coasting. She had absolutely no intention of pedalling if it could be helped. It was disappointing then for us to find hills en route. The route had been described as downhill and mostly flat.
Indeed, encouraging people had on multiple occasions described the approaching terrain as “Oh, mostly downhill and flat compared to what you guys have biked already.”
As Katie pointed out, what we’ve biked already are several Rocky Mountain passes. “I want you to compare flat with flat, not flat with Allison’s Pass.”
Fair point.

Cycling along highway 1a to Banff we saw three peletons of cyclist, an elk and a black bear. I’m particularly pleased about seeing the bear as we were almost out of bear country. 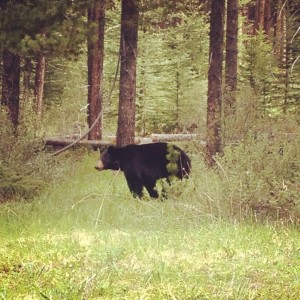 Photo credit: Katie Wanderer. Yes, we were that close.

Talking of bears, it turns out that I’ve nearly seen a bear twice. Firstly Nic and I cycled straight past a bear on our way up Allisons Pass and didn’t realise. But the Wanderers (who stayed an extra day at the campsite in Canyon Hot Springs) found out that the next morning that a bear had been wandering around our campsite, indeed was right outside our tents in the night. We (wanderers and I) had stashed all our food in the laundry room, far from our tents. Bryan (being arrogant/ stupid?) had left all of it outside his tent, neatly packed in a bag just a few yards from our canvas abodes. The wanderers discovered all this when the saw the wardens setting up traps the next morning. Needless to say, I’m glad I found out about this a safe 200+km away.

We cycled to Banff and stopped for a prolonged break, trying to wait for the rain to stop (it didn’t). 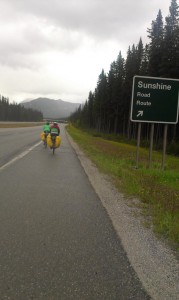 Sarcastic signpost on the way to Canmore.

The last 24km to Canmore were delightfully along bike path. The wanderers were staying with a family friend so just out of town they phoned them to get directions.
“Erm… We also have a third cyclists with us. Could she camp in your garden?”
Well, it turned out Betti and Ric live in a condo but were more than happy to let me unroll my thermarest in their living room. After a wonderful evening with them (featuring great food, private Irish folk music performance and lots of laughter) I lay down on my thermarest on the floor of their living room and had the best night’s sleep I’ve had in Canada.