You would expect people who work for an environmental organisation to be interested in the diverse, colourful and endemic wildlife that Canada has to offer.

Yet for the the last 5 months my colleagues have been captivated by only one animal: bears.

Paw jokes
Colleagues have shared with me unbearable puns, grizzly stories and concerns that I will be munched by a bear. One colleague has even taken it upon herself to send me a daily bear joke. Given her efforts, I thought it only fair to share one:

A policeman in the big city stops a man in a car with a baby bear in the front seat.
“What are you doing with that bear?” He exclaimed, “You should take it to the zoo.”
The following week, the same policeman sees the same man with the bear again in the front seat, with both of them wearing sunglasses. The policeman pulls him over.
“I thought you were going to take that bear to the zoo!”
The man replied, “I did. We had such a good time we are going to the beach this weekend!”

Grizzly stories
Only one sensible colleague has said anything useful about bears (having been to Alaska.) Other colleagues have worried me enough with fanciful stories that I have done extensive research on bears. Here are some of the more interesting facts:
* Bears can run up to 30mph – that is faster than me cycling on the flat. Although doubtless I’ll find a surge of strength if I am being chased by a bear.
* Grizzly and black bears are not attracted to the smell of menstrual blood – but polar bears are. (I love that someone has clearly done a PhD on dangling used tampons in front of bears. Bet they are a good dinner party guest.)
* It is actually more dangerous to go to work. 173 people die at work each year in the UK, compared to only 3 people in North America killed by bears. I can see my colleagues now all reaching for the unpaid leave request form…*

Bearing gifts
I was very touched yesterday (last day at work until September) that a thoughtful colleague arrived at my deak bearing a parting gift: 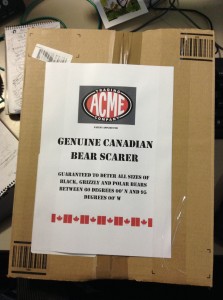 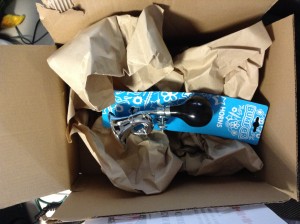 Nattily packed in a box 10x larger than the item

Alas I was too polite to point out that scaring a grizzly witless by tooting a loud horn is a sure way to end up as the hors d’oeuvres at a teddy bears’ picnic.

However the horn will come in very handy into scaring witless the annoying dogs that meander across the bike path to work – the dog on one side, the unobservant owner on the other and the leash-cum-lethal-trip-wire stretched across the path.**

And finally…
I just want to say thank you to the team. I may have heard the same puns over and over, and you may be bored of my endless Canada chatter but I am very grateful to my employer for giving me the time off work and to my friendly colleagues for being so much fun.

* The geeks among you will be keen to point out that there are lies, damned lies and statistics. Clearly the population sizes are different and more people work in the UK than there are people who come into contact with bears in North America. Still, all my colleagues will be safer now that I won’t be driving into work or parking directly into their cars for 3 months…

** I should point out that yes we do share the path and cyclists should take care to similarly avoid running over dogs and children. However, cycling to work earlier in the year I did have to make a sharp skidding diversion into a fence to avoid tripping over a lethal dog trip wire. The owner was a grumpy sod.

My fear of bears

Bears. Grizzlies. I started worrying about bears concurrently with planning my trip. The worry went something like this: And there I’d be – camping alone in the middle of a forest, curled up in my sleeping bag. Every shuffle from the trees is the threat of a bear, every gust of wind a sniff of my scent, every snapped twig a footstep approaching…

My worry was hugely exacerbated when I was kindly given a book for Christmas called Call of the Wild. The book is written by a Scot, Guy Grieve, who lived in the Interior of Alaska for a year. In it he recalls the tragic story of a man, a self-taught expert on bear behaviour, and his girlfriend who were both eaten to death by a bear in October 2003. As Grieve explains “it takes a long time to be killed by a bear, as they start on the lower limbs, buttocks and soft tissue. Bears are also keen on our glands, and seek these out with relish… [the man’s] death lasted for over an hour.”

My first thought on reading this was that “with relish” is a really inappropriate turn of phrase as it evokes an image of a bear popping open a jar of piccalilli. The second thought, confirmed by glancing down at my ample behind, was “oh goodness, can you imagine how much lower limb and buttocks I would have as a transcontinental cyclist?” That would be a very, very long lunch.

It’s at this point in trip planning that panic sets in. But no! I say, with great resolve. I must get the FACTS on bears.

So I do what I should have done months ago and look up the stats on bear attacks on Wikipedia. I am at this point on my Dad’s computer. My Dad is ironing his work shirts in the background. I read aloud:

“Oh yes,” interjects my Dad, “you should worry about the lightning. In the prairies your metal bike and tent pole will be the tallest things for miles around.”

And suddenly my fear of bear vanishes in a flash of lightning.