Is 11am on a Sunday morning too early to drink whisky?

After yesterday I think I needed it.

Canada does not stop amazing me. And you would have thought that after cycling across the Rocky Mountains, the prairies and the Canadian Shield then there would be no terrain left that I couldn’t pedal like the garden path. Think again.

Cape Breton is not the garden path. This terrain manages to combine the steepness of the Rockies with the relentless undulating mounds of the Canadian Shield and, as it showed yesterday, it can throw in a headwind reminiscent of the prairies. It’s a very good thing I’ve done 7,000 kilometres of training because this is Tough. There is not an inch of flat ground on this island.

I woke up this morning in my cosy little hut. Even before I’d shed my cocoon a flex of my leg told me that I would be in trouble today. My quads, hamstrings, piriformis all felt like they’d been through a mangler. You know that feeling when you hobble around the office the day after you’ve exerted yourself on something like a 10 mile run? You laugh merrily about what a fun weekend you had while all the time being extremely grateful that you get to spend the day sitting in a chair. My legs were not laughing merrily. You want me to cycle 100km today? They laughed, but it was in disbelief.

I was on the road by 8:45am. The road was empty save for a single exhausted cyclists with legs laughing in disbelief. The sky was empty save for a scrap of white cloud that looked like someone had pulled a comb through icing sugar. Since it was Sunday, the birds and butterflies were having a lie in and they did not stir from the wild flowers or flap from the bush as I pedalled past. The wind was tranquil. It was so quiet I could hear my own breath as I rasped up another steep incline. My legs burned with each upward pedal stroke.

Each five minutes of tormenting climb would be rewarded by one minute of fast descent. It seemed an unfair trade for my legs. My thighs dreamt of soaking in a hot bath and falling asleep in fresh sheets. But I know, when I am next bathing in Radox bubbles, I will dream of cycling in Nova Scotia again.

I stopped for supplies in a small town. The grocery store had decorated its foyer with a large stuffed moose head which peered over shoppers’ heads as they nipped in to get milk. I decided I needed to have at least one more campfire. So I purchased all the makings of a great Canadian campfire feast: baked beans in maple syrup (yes, that’s real), spider dogs, and s’more ingredients (chocolate, marshmallows, graham crackers).

After a further burst of cycling I pulled off at the entrance for the Glenora Distillery. This distillery, a cluster of white washed buildings festooned with the brightest ruby red flowers, produces the only single malt whisky in North America. Nova Scotia isn’t called Nova Scotia for nothing. Approximately 20% of the people claim Scottish heritage although that proportion is higher in areas like this. The distillery tour finished with a wee dram. I would have liked to have bought a bottle in the gift shop but I feared the extra weight on my panniers. 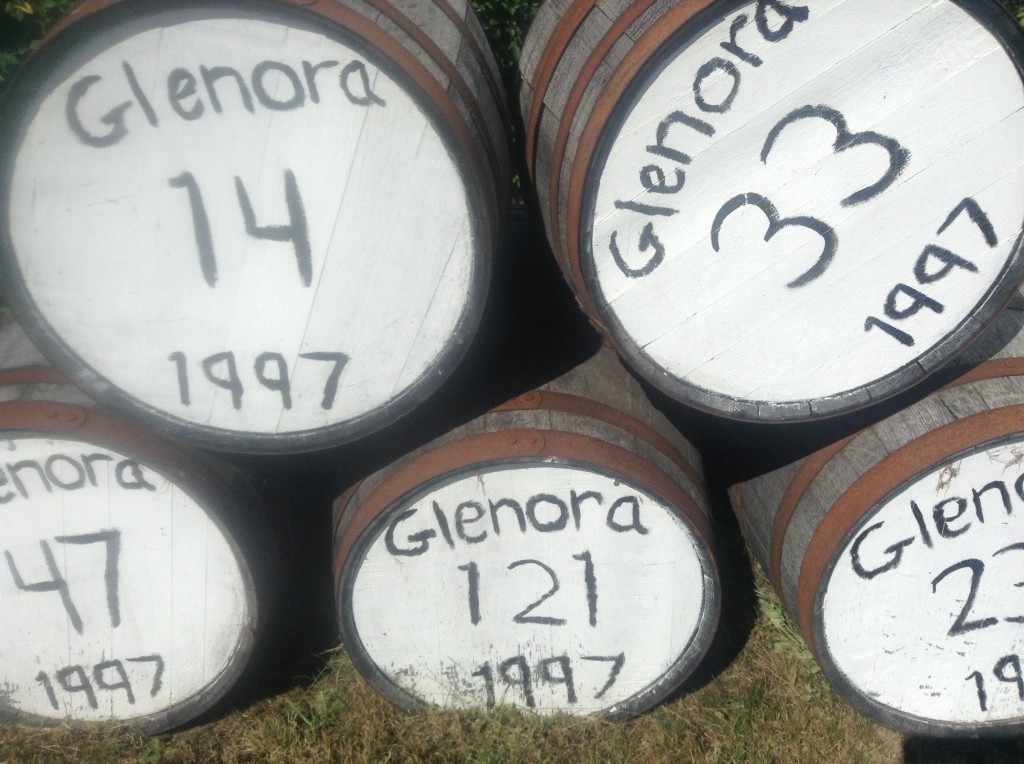 The day continued to offer a blend of challenging hills, sunshine and, thankfully, calmer winds. As the road bent towards the coast I joined the Cabot Trail proper. I passed a number of small villages, their painted wooden houses facing the sea. Fishing boats bobbed in the harbour. A tangled turquoise pile of lobster pots stood for sale. Rocky, sloping headlands protruded into the surf. 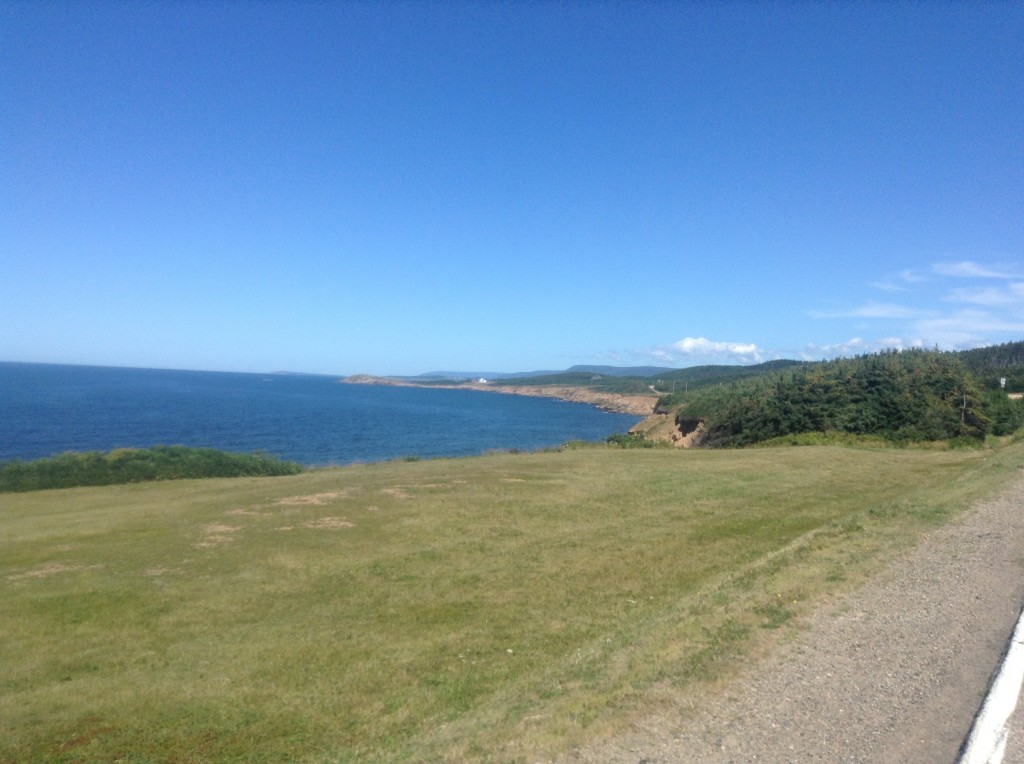 My destination for the evening was a sandy campground hidden in the corner of Cheticamp island. Cheticamp island isn’t an island any more. It was over a hundred years ago that the sand bar moved. Now a pile of rocks has turned the sand bar into a causeway connecting this sandy comma of island it to the rest of Cape Breton.

What a beautiful evening. I have waited 3 months for this evening: it is dark and I am still awake. The sky is clear but the moon is hidden. I am far enough away from anywhere that the land is dark. The bugs are in bed and I have a campfire to keep me warm. I lie on my back, nestled by the fire. The blue of the evening dims to the black of night. I look up as the full beauty of heaven’s cloth is unfolded across the sky.

I gaze up at the finest black velvet embroidered with a multitude of stars. Another star seem to have been sewn on each time I blink. The campfire crackles and purrs its way through another log. Bats fly overhead, darting like swallows. As I look up at the night star I wonder how small I am in all of this. Smaller than a pebble on a beach. Smaller than a leaf in the forest. Smaller than an island in the ocean, but still connected to the mainland.

How to start a fire with a tampon

Did you know that the trick to lighting a campfire in wet weather lies in a lady’s handbag?

Specifically, this is a lady who a) smokes b) has chaffed lips and c) is on her period. 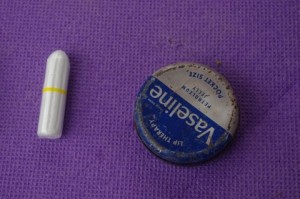 Key campfire ingredients: a tampon, some vaseline and a lighter.

Now, I’m not exactly the type of lady who has a handbag but I did chuck these important items into my backpack when I set off on a camping trip last weekend. My aim was to test my new tent and to practice making a campfire.

In typical British fashion the weather forecast was… drizzly. So like any intrepid modern day explorer I prepared for my camping expedition by watching very macho men on YouTube demonstrate how to light a fire. Alas, I don’t have a beard, a knife, an SAS background or a Swedish fireknife. But I can show you have to light a fire with a tampon.

So, what do you do then?
1. Unwrap the tampon and then unfurl it so it’s a rectangle (yea, who knew tampons were actually rectangular?)
2. Smear some vaseline over the tampon.
3. You’ve already make your stone circle and gathered your kindling, sticks and logs right? Great. 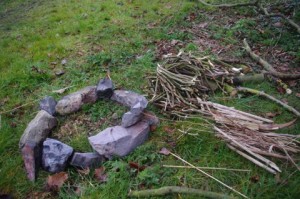 Stones, kindling, sticks and a couple of logs for later.

4. Place tampon on stone circle. Cover with a bit of kindling.
5. Light the tampon string.
6. And you’re off… 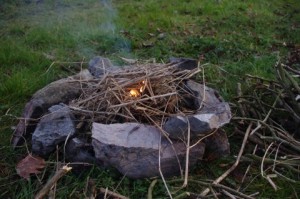 Before kindle was an e-book, it was a way of starting a campfire. The irony that paperbacks will become kindling…

7. Blow and add wood as necessary.
8. Get the marshmallows out. 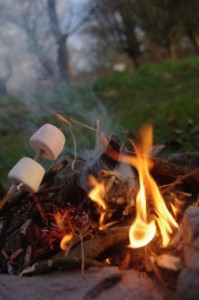 I could blog at length on how to toast the perfect marshmallows. Another time.

9. Lie back, listen to the gentle hiss of the water burning out the logs.
10. Watch the stars come back. Smile.

What is this life, if full of care, we have no time to stand and stare…