How am I still cycling?

I was exhausted yesterday. I have been through exhaustion and out the other side. I have never, ever felt like this. Yet here I am. On a bike. I am still pedalling.

I slept very badly last night due to the humidity and the relentless mosquito hunting. I don’t understand how in a space as vast as northern Ontario these little buggers crowd into my tiny one-person tent. I had a small swarm inside my tent that I was forced to track down one by one with my head torch. I have the technique down a bit better: sweep the head torch down to the end of the torch the sweep up, chasing them with the light, into the roof of the tent before battering into the side of the tent. I’d catch them all then lie back down to sleep before another buzz and a sharp prick in my back tells me another one is still alive. The hunt continued into the small hours. In the morning my tent resembled a battle ground with smeared blood and tangled mosquitoes bodies strewn hither and thither across the yellow canvas.

The second wave of militants arrived as soon as I stepped out the tent. They nibbled at my thighs. The munched at my face and hair. My bug spray is pretty disgusting and slightly ineffective. So I was forced to wear full waterproof garb and a hat despite the heat.

A further misfortune occurred when I managed to knock my coffee over this morning with my thermarest. The thermarest escaped unscathed but, sadly, I had only drunk a few measly sips of the freshly brewed coffee before the incident. As you may know, i do not cope well with life uncaffeinated.

As a result the first 40km to White River were a slog. I ate 2 and a half energy bars to keep me going.

White River is the home of Winnie the Pooh. A large sign with a waving Pooh welcomes you to the small town. The story is that back during the First World War a military man came to White River and purchased a black bear cub as a mascot. He named the bear Winnie after his hometown, Winnipeg. I think having a full sized bear as a mascot seems a tad of an awkward sized pet to have in the military. It left me wondering: did they ever had war bears? Presumably not as when the man went off to fight in France he left his dear Winnie in the care of London Zoo where he was visited by A A Milne and his son Christopher. You know the rest. 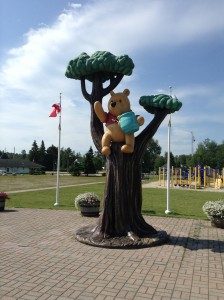 At White River I paused briefly over the Pooh statue before heading to find some munch needed coffee. I was met by a bearded biker. By biker I mean motorbikes. Seeing me and Monty (and presumably reading my one and only cycling jersey) he struck conversation, clearly having decided that we are kindred spirit. Mr Bearded Biker was on 24 hour, 1,000km mission. He had left Toronto at midnight and was headed to Deluth in Minnesota. Working with out in my head it didn’t seem necessary for him to have left at midnight. The speed limit is 90km per hour. So presumably bikers go at 100km so… 10 hours. Hed be there for brunch. It seemed an odd sort of mission to me.

Ever after coffee I didn’t feel much more energies as I continued to slog into a relentless headwind. I had said goodbye to the Wanderers at the campground so I was cycling alone and there was no hiding from the wind. All day I kept my eyes peeled for moose. Eyre try few kilometres there were signs warning drivers of these kings of the forest. In White River I’d overheard a man exclaiming to his friend that he’d seen a bull moose on the highway that morning. I scanned the pine forest, the open meadows, the swampy bits, the thinning trees, the inlets of the stretching lakes, and checked the creeks running under the bridges but – alas – there was not a moose all day.

I stopped for lunch at the side of Fungus Lake. Every patch of water on the highway is labelled with a signpost so I knew it was Fungus Lake even though there didn’t appear to be a fungus in sight (maybe the moose ate it before it scarpered.) I sat on a rock, slowly nibbling my cheese and crackers, trying to enjoy the cool blue views of the lake and forget the 50km I still had to ride.

I didn’t think I’d make it until I reached 108km. That means 18km to go. I know I can always cycled 18km because its the distance back from work. At the same time I was counting down the kilometres to the magical (yet entirely arbitrary) half way mark. At 3,750km mark I screeched to a halt. Here I am exactly (ish) halfway across Canada. To my right was a swampy bit with some trees poking through the tall grass. Ahead was a signpost advertising the White Fang Motel. The road was a bit cracked and gravelly. The sky was a little clouded over. But Monty and I had made it. I gave out a whoop of joy and then almost immediately felt sad that my adventure was now halfway to the finish. 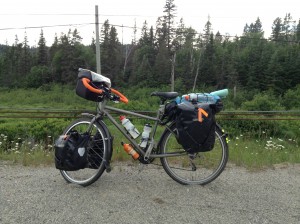 Monty at the halfway mark

I slowly slogged the last few kilometres to the campsite. Without the energy to pitch my tent, I flopped on the earth into a catatonic state. And lay there. Tomorrow is a rest da. Thank goodness.

Canada, Cycling across Canada, Mosquitoes, Ontario, pain, why am I doing this?