Erm… Don’t know. Why? “There’s a storm coming,” the man said, turning his head from his cup of coffee to nod up at the looming clouds out the window. At this point we probably should have hopped on our bikes and cycled as fast as possible to the local campground. Instead we shrugged our shoulders, munched a bagel and watched as the threatening clouds released bucketfuls of water onto the ground. Oh.

I’d enjoyed the day’s ride. It was just under the 100km mark and felt must easier. Why 99km is practically a rest day. I saw a baby black bear (bringing bear count up to 3) and the first wild pelican of my life.

Most notable today was the kindness of strangers. Today our free log cabin was surpassed in friendliness when we stopped at a store to buy groceries. They didn’t have a huge selection of foodstuffs but the lady there informed us there was a better grocery store a few kilometres up the road- back the way we came. Our faces must have drooped. “Do any of you have a driving license?” she asked before handing Sofi the keys to her car. Wow.

Clouds were looming all day but we had all but forgotten the threat of thunder as we merrily counted down the kilometres to Fort Frances. We knew the town had a Tim Hortons and thus Boston cream donuts were on the horizon. We arrived happy and victorious.

Oh. Until the thunderstorm. And the last 4km cycling in a deluge to a motel. The road had turned into a river. My feet were instantly sodden by the water. Huge puddles turned into lakes on the tarmac as we eddied down the road. Have you ever been annoyed when the light is red but there’s nothing coming the other way? Imagine it is 9pm and you are cycling in a thunderstorm. I cursed every single red stop. Lightning strobed in terrific awe over the bay as we pulled up at the motel. 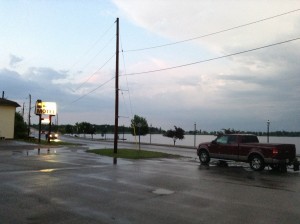 Photo taken after the thunder and lightning had ceased

I’m still not sure how long exactly it takes me to pitch my tent. Probably less time than it takes to Google a motel and cycle 4km in a deluge…

The study of sunshine

Today the shadows of my pannier bags have been cast at every angle. In the 12 hours on the road it took to travel the 120km south to Nestor Falls my bike’s shadow has turned 180 degrees. Today has not been a bike ride so much as a study of the heat of the day.

After yesterday’s hot frazzling in the heat we wanted to ride in the cool of the morning. We were awake 6am, just as the sun was beginning to climb over the trees on the campground. It was so warm overnight that there was no condensation on my tent. I had slept in my underwear covered by only a thin silk sleeping bag liner. From now on it was only going to get hotter.

It was so much more pleasant cycling in the low 20s than it was yesterday in the heat of the day.

The hills continued relentlessly up and down. The ceaseless rise and fall of the hills was as sure and predictable as the inhale and exhale of breath in a yoga class. Inhale for 3, exhale for 5. We made steady progress against the hills although the wind was against us. Still the forest protected us slightly from the headwind. I would take the hills over the prairies any day. The scenery here is so beautiful.

The scent of pine wood drifts in the wind from the forest. Lakes and pools appear, cool and inviting, the water surface decorated with lily pads and reed. The road side is sprinkled with giant daisies, small fiery-orange flowers, and piles of jagged rocks which provide the occasional shelter from the igniting heat of the day.

The road is much quieter than I expected. I am already glad that we took the 71 highway south rather than continued on the busy, truck-heavy Trans Canada. This route is about 100km longer. But I think the distance is very much worth it. There often isn’t much of a shoulder but there are so few vehicles (and very few trucks) it feels a lot safer.

Sofi’s gears were skipping. And later in the day so too were Katie’s. But there isn’t another bike shop until Thunder Bay – another 4 days away. I managed to fix the problem by replacing the chain and tweaking the rear derailleur. I realised later this is the first new chain I have ever fitted entirely by myself. I know it’s not a hard job but it’s one thing to fix a bike in comfortable Oxfordshire with either a Dad or a Ruth peering over my shoulder and quite another to have two Wanderers peering over your shoulder while you fix their bikes miles and miles from anywhere.

We stopped for long break from midday sun at Sioux Narrows. During our siesta we swam in the lake. I dived in off the dock (nearly lost my knickers to the water) and swam lengths back and forth to a dock on the opposite side of the inlet. The cold water and swimming felt both refreshing for my tired legs and restorative for my knee.

The last 46km to Nestor Falls was a slog. Katie Wanderer and I have matching knee pain. Sofi Wanderer was experiencing sharp pain in her shoulder throughout the day. It only seemed to be getting worse. One shoulder is visibly lower than the other while cycling. None of us were feeling very chippy or chirpy. The hills didn’t stop as we ploughed into the headwind in silence.

I am continually amazed on this trip. When something goes wrong, feels awful, feels too tough then something happens that picks me up again.

Finally we pulled up at a place called Canadian Haven. It was listed as a campground on Google. but clearly there wasn’t anywhere to camp. The guy who now runs it had just taken it over. He showed us a small patch of grass, asked about our trip. Then paused. Then he offered us to stay for free in a log cabin overlooking the lake. He only asked for us to take our cleats off outside.

While the Wanderers made dinner, I sat outside fixing Katie’s bike and cleaning Monty in the warmth of the summer evening. There was chatter from the docks. Two American fisherman drinking beer on their porch discussed their best catches in the slow drawl of their accents.

The day closed as I was sitting on a rock by the lake shore watching the last of the watery light receded behind the hills on the far shore of the lake. I listened to the lapping of the water, gently stirred by the wind, against the rocks on the shore. I watched the silhouette of two spiders spin fine and fragile webs between a trio of pine trees. The air was cooler now and the frustrations of the day slowly melted with the disappearing colours of the sun.

Swimming in the heat

The heat was making me wilt like an unloved pot plant. I was just laying out my towel in the shade at the side of the highway when the pick up pulls up. We don’t want to hitchhike. But we wander over anyway to the wound down window

“You know just 3-4km ahead the lakes begin. My house is right by the lake and you’re welcome to swim off the dock.”

This sort of thing has happened again and again in Canada. It’s all going downhill (in everything except the literal sense) and then a friendly Canadian pops up, offers us something amazing and the days turns around again. Today this man’s kind offer (and waterslide) saved us from wilting in the soaring mid-30s heat. Tumbling in from the waterslide instantly rejuvenated me.

The “look” for Ontario is this: swim suit, sunglasses, deep tan lines on leg and cleats. It’s a style. 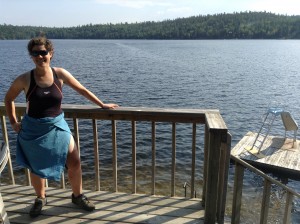 Milan called. They want their fashionista back.

Swimming is apparently good for my knee. As is cold. In Ontario that essentially equates to swimming in cool lakes. Oh yes, did I mention I’m now in Ontario?

You could tell it’s Ontario even without the signpost because of the change of scenery. Gone is the flat, agricultural land. We are now cycling through the forest on endlessly undulating land. The cycling is quite challenging but much more enjoyable than Manitoba (thanks to decent tarmac). There are more bugs, more birds, more… Life. I think I could enjoy Ontario. 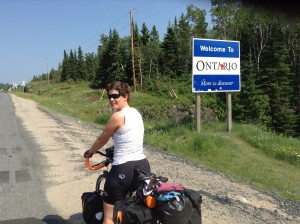 After a long splash in the lake the heat of the day had cooled off. We still had 30km to go to Kenora. It was approaching dusk as we whizzed over the steel bridge into Kenora in a tangerine light that illuminated the lakes around us.

We arrived not at the campsite but at the pub. It had been a long, hot day and we needed beer. We pulled up at campsite just before 11pm and for the first time on this trip pitch our tents in the dark.