The Last Avocado to Halifax

I awoke to fog. A few lamps cast fuzzy globes of warmer light on the grey, misty campground. The springy carpet of moss and thick grass was wet as I rolled up my tent for the last time this summer. Back at home, the Canadian geese are doing practice flights across the river. Soon enough I too will take the migratory flight home.

I followed the coastal highway headed west. The fog hid the stitches between the ruffled ocean waters and the opaque sheet of sky. The air was cool, wet and quiet with the solemn stillness of an early Sunday morning. Gone are the holiday makers. Derelict boats, the paint peeling from their hulls, and houses for sale pointed towards a more affluent past when abundant hauls of lobster and cod were the order of the day.

A sunning of cormorants stood on the harbour rocks waiting for the cloud to break its hold over the sky. Flashes of lemon-yellow tweeted in the trees, the goldfinches fluttered and called in turn as the cyclist pedalled by. I stopped to enjoy the view of one of the harbours. Looking out into the water I was not aware that eyes were watching me until I turned to continue and saw, at the crest of the hill, the lithe figure of a deer. Our eyes met and the spirit turned, springing into the air with the grace of a ballerina. I watched its dancing retreat along the road until it disappeared back into the spruce forest. 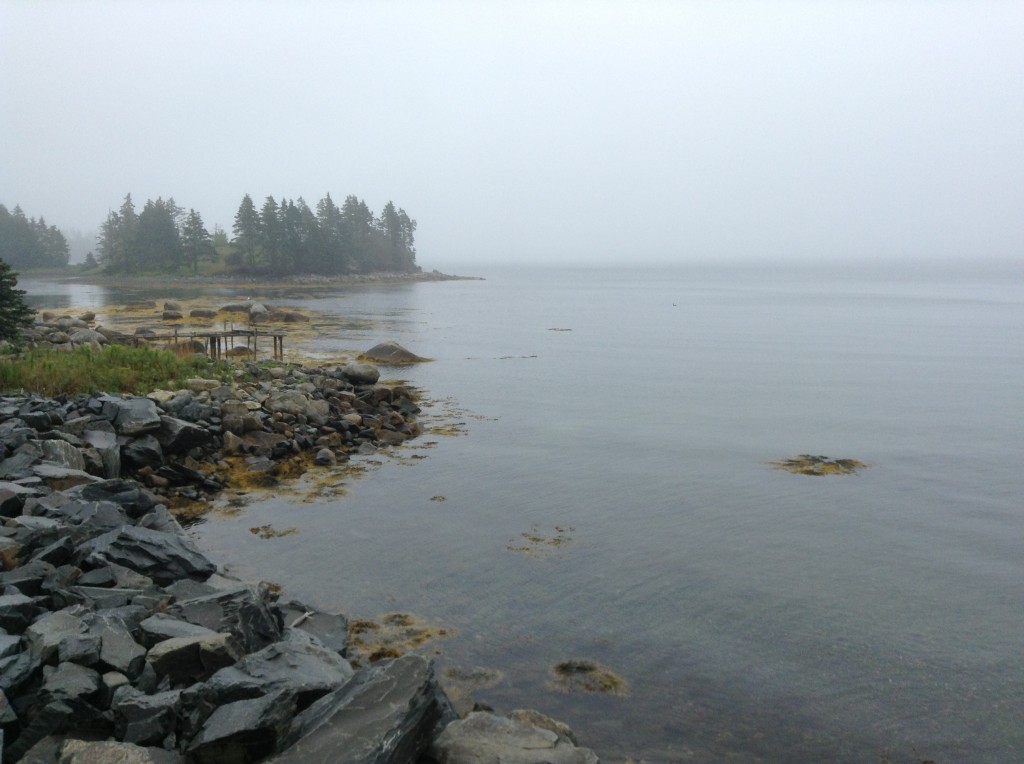 After a slow but steady morning on the road I cycled through a harbour town where I expected to find a dry picnic spot where I could ceremoniously eat The Last Avocado. These coastal towns usually only have one road – the highway – and so stretch out for a few kilometres without much of a central hub. I passed all the way through the town without finding a spot. Still hungry, I had to take my turning off onto the main highway towards Halifax.

Within meters the heavens opened. First one heavy drop, seconds later a pounding rain battered the road like an army of drummers. The cold bullets of rain hurt as it hit my bare legs. There were no buildings in sight, no rocks to hide under, nor trees that could afford protection. The wind created ribs out of the waves sliding down the road. With nowhere to stop and a hollow stomach I kept on pushing up the hills.

Then: a triple flash of lightning. The head-splitting crack of thunder. In that flash and roar echoed the terrifying memories of Calgary. Except for the dip of the hills, there were no structures pointing to the sky – no buildings, not even a telegraph pole – a lone, drenched figure on a metal bike cycled alone into the thickening storm.

I imagined the sad tale of the person who cycled across Canada only to be struck by lightning 30km out of Halifax. It was in the local paper.

I carried on pedalling. My muscles burnt with lactic acid as I ascended the steepening hills. In defiance of the 12th day of non stop riding, hills and lactic acid, my Atlas legs burned along the highway. I have not cycled 7,500 kilometres across a continent to be beaten now.

I came to a flyover bridge and hid underneath, waiting for the thunder to past. Please go, please go, I urged. Before I get too cold. I stuffed my last protein bar into my face, packed my jersey pockets with the last of my jelly beans and M&Ms. I heard the cracks of thunder reseeding into the east. The westerly wind blew against me as I mounted Monty for the final time. I am not going to stop.

I did not stop until I reached the city limits. The gaudy lights of the gas stations and fast food outlets were a dazzle of harsh colour against the grey day. The traffic into town was busy and gave me little space as it splashed past me. Two Alsatians in the back of a pick up truck barked loudly as they shot past me. I ate a final handful of jelly beans and headed for the ferry.

I arrived at the Dartmouth ferry terminal just as a boat was pulling in. We boarded the boat. The end, on the far side of the small harbour, was in sight. My cold fingers unwrapped the last bite of my Kendle Mint Cake. I have carried this with me since the very beginning and it has survived, as sweet and restoring as ever. The ferry pulled out its dock and putted over to Halifax.

“Monty,” I said, rubbing my fingers along the neck of his frame. “Monty, we made it.” 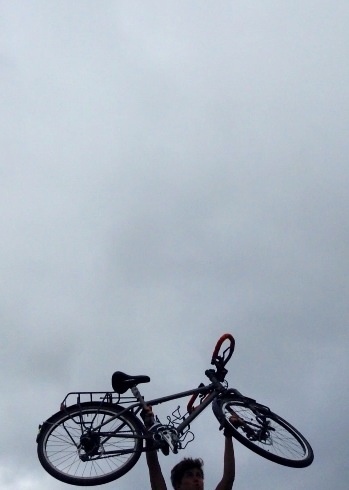