The long slog to Pontneuf

I am an encumbered tortoise on a treadmill.

There was a headwind all day to make my life tough. To be fair, it was also extremely flat. I ponder the endless cyclists’ debate of hills versus wind. I vote wind. Yet, be it the wind or my legs, I was feeling tired and sluggish. An early Second Breakfast (after only 12km) did little to increase my speed although it did mean I am now out of homemade muffins. Woe.

I slogged on to Trois Riveres (note: my iPad doesn’t appear to do accents). I was still in need of a boost so stopped for a coffee and donut. Alas even caffeine and sugar did little to increase my energy levels. I plodded on like a harnessed donkey.

I stopped at a grocery store to restock my panniers. Outside I was met by a guy in a large, loose-fitting shirt and a pair of bug-like sunglasses. Michael was friendly and seemed to be a keen cyclist. Yet I also feel a bit nervous when folks (other than mechanics in bike shops) start asking too many questions about Monty.

Michael seemed admiring of Monty yet also apparently didn’t have the foggiest what a fine specimen Monty truly is. ” How much did it cost? About $2000?” He asked.

“Aren’t you worried about strange men?” He asked, without irony. “I mean, I’ve never heard of a cyclist, a woman, like you being attacked in Quebec but you never know.”

Oh, is that he type? I had best pedal off else I’ll be late.

A hard slog of cycling later and I met some friendly bikers at the lunch stop. They have a resectable amount of leather, shiny metal and protruding beer belly between the four of them. One, a large man fully clad in leathers, was so impressed he took a photo of me posing next to Monty. One of his friends boasted he could get to Halifax in 14 hours. 14 hours!! Please don’t say stuff like that. I have 3 weeks of cycling to go. I asked if any of them wanted to swap their Harley for my Monty. They did not. Yet it was nice to chat to the bikers as I get the impression that bikers have a better sense of distance than the average Joe. They seemed to appreciate the joy of watching the world zoom by, the shiny bits of your bike gleaming in the sunshine, as you cruise/slog down the open road.

Despite the headwind I enjoyed the scenery today. The quiet route 138 continued to follow the side of the river. I passed the pastoral scene of ripe corn fields, lowing herds of cows, pick-your-own blueberry fields, colourful boxes of beehives, and butterflies fluttering among the wildflowers. 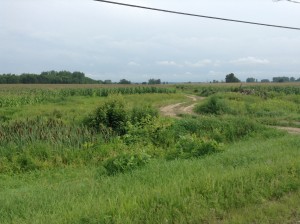 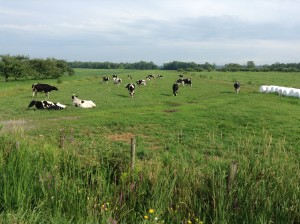 The lowing herd winds slowly o’er the lea. Or not. Or they just sit there.

Finally made it to campground after a long day on the road.

I am sightly bemused by this place. It is jam packed. But so jam packed that it resembles a car park (translation: parking lot). The campsite is set out in a grid pattern and every small rectangular lot is filled with an RV. Goodness knows why it is so popular as it is not particularly near a lake, river or anything else. It’s also one of those places where people ride round in buggy carts (like the ones they have at golf courses) because clearly it is so far to the toilet, garbage etc.

After 110km of flat today it really does feel like the last 5,000km have caught up with me. If someone could post me a large, squidgy armchair that would be perfect. Or better still a body-enveloping sofa or bed with fresh linen. I hope that I get my energy back as I still have 2,000km to go. It is now 8pm but I will just wash the Kraft dinner remnants from my bowl and head to my tent. Tomorrow I will be in Quebec City. But for now I wish only to be horizontal.