The Other End of the Land

Hurrah! We made it!

I would be lying if I said that it was easy. Foolishly I’d imagined that cycling Lejog wouldn’t actually be that hard. Having spent half of June cycling between Trappist beers and cheese in Belgium, I was expecting that the ride across the UK would retain the theme of easy cycling interspersed with leisurely stop. Instead we got long days in the saddle, strong winds, lots of rain, lots of hills, more rain, more hills and a couple of storms and a bite of cold weather to finish it off. Blimey.

Now I understand why people spend their holidays horizontally by the hotel pool sipping sangria. Having cycled and camped for three soggy weeks, these are the things I appreciate more: a dry bed, not having to put shoes and a waterproof on in order to wee in the night, not having to check the weather like my life depended on it. Oh, and eating salad.

I woke in the night to pull the fleece blanket around me. Despite my many layers, the cold still creeped in. By breakfast time the midges were already out in force. I tried to spray myself with midge repellent only to discover that the overnight cold had solidified the liquid in my bottle. My Dad checked the temperature on the car: it was 3 degrees.

The weather today was annoying: a strong headwind, sunny and dry. This was the complete opposite of the rest of the trip. The final photograph by the signpost would show us in the sunshine but that is NOT a fair representation of the trip. Nonetheless, I am grateful for the tailwinds we’ve had so much of the way as it was hard going against the wind.

Orkney was visible to the left, a large slab of land across the water that we could use to measure our progress along the coast. The hills eased as we travelled further east. On the west coast we’d been surrounded by harsh rock, peat bogs and steep descends. Here the flatter views looked out over pasture, crops and houses. Throughout the day we waved at cyclists who were finishing or starting their trips. You could which ones were which by who was clean and who was weather beaten.

We munched one final packet of oatcakes, one more block of cheese, and one final slab of flapjack. I had one final scenic wee by the roadside, admiring the purple thistle. The final kilometres ticked down slowly until we took one final left turn. I freewheeled down the hill towards the sea. My mum was already there to guide us straight to the signpost and crack open the ginger beer. My Dad and I posed for photos, chinned glasses and glugged ginger beer.

We’ve made it: these two tired Lejoggers have now Lejogged. 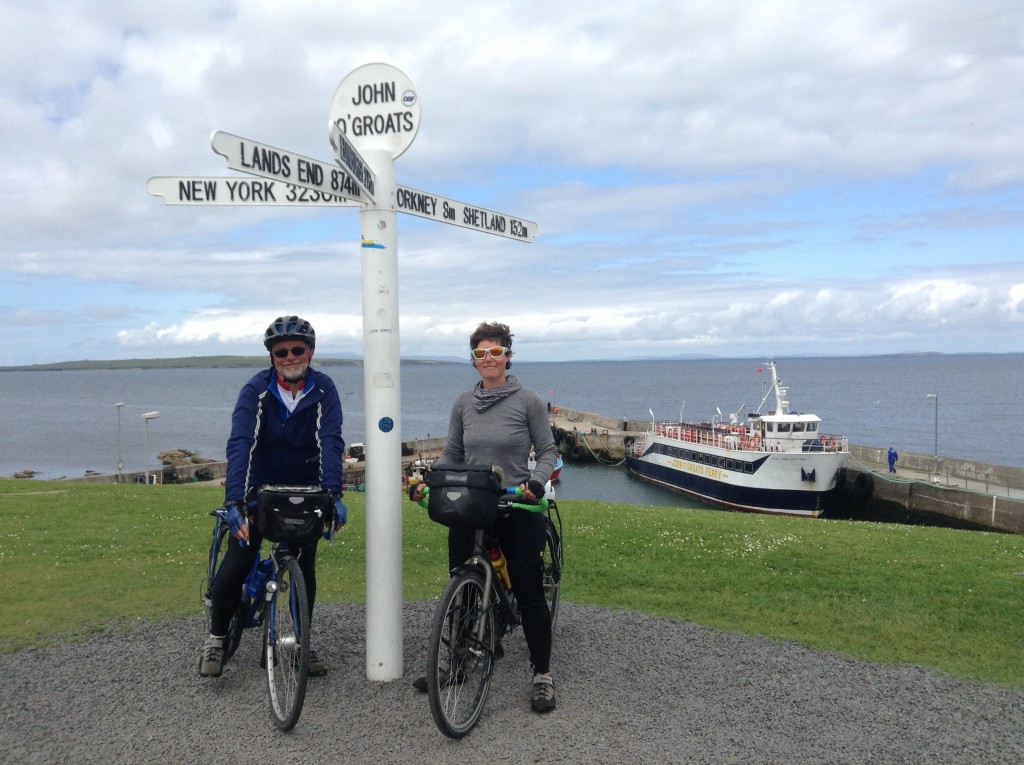