The people you meet

“Oh, I would have thought you would have cycled further than this,” the man said by way of introduction. I gave him a blank stare. Apparently he’d seen us in the bike shop in Swift Current two days ago. Further than this? We biked 173km yesterday.

“Do you have a pump I can use?” He asked. He’d flagged us down just as we were headed about 10km outside of Moose Jaw. He had been sitting on the verge with his bike strewn around him. He didn’t look like a tourer because he only had one small pack on his road bike. It was already mid-morning as we’d taken a leisurely breakfast at Timmy’s in order to catch up on blogs and drink a coffee that doesn’t taste like every other camp meal we’d eaten.

“Schrader or presta?” I asked.

“Huh?” He looked at us like we were stupid.

“Skinny or fat valve.” Sofi translated pointing at the difference between the tubes in her wheel and mine.

“Oh, skinny. I should cancel my taxi.”

Taxi? I dug into my pannier for the pump. The guy started talking to the wanderers. The usual conversation: where did you start, where are you going etc. Oddly this guy told us he was biking across Canada (albeit in stages) and was headed to Winnipeg. That’s 700km away I thought, overhearing the conversation. Would you not take a pump on a 700km bike ride?

The guy was clearly rich. A plastic tourer with a much greater credit card limit to pannier bag ratio than we have. Who else pulls out their cellphone in the middle of nowhere and calls a cab? Who else DOESN’T CARRY A PUMP WHILE CYCLING ACROSS CANADA?

The wanderers and I shared a glance: what a twat

Thankfully just as I was pulling out my pump a taxi pulled up and the guy decided he would head back to town. I would have thought he’d have got further than this… If only he carried a pump.

After meeting The Rich Twat With No Pump we merrily pedalled on in the sunshine. We passed through the Queen Elizabeth trees. Apparently, when Queen Elizabeth came to visit Saskatchewan in 1959 the powers that be decided to plant a corridor of trees on the road from Moose Jaw to Regina so that Her Majesty wouldn’t be bored by the endless, boring prairie view. 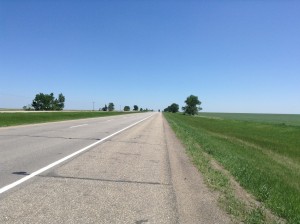 These are Her Majesty’s trees

The cycling today wasn’t too challenging but nor was it particularly exciting so Katie and I played Top 5, 20 questions and our own home brewed version of Sporkle to entertain us while Sofi focused on the pain of her chafing inner thigh hinge (!)

When we arrived at Regina we stopped at a bike shop so Sofi could fork out a small but worthwhile fortune on a shiny new Brooks saddle (it’s brown so it matches her handlebar tape).

We’ve spent the evening staying with a very friendly guy called Ron, a keen cyclist who has converted his basement into a bike workshop. After stuffing our bellies with turkey, strawberries and cookies we played bike mechanic with Ron. We all learnt a few things from Ron, clearly an expert, as he checked over our bikes. I was relieved that he wasn’t worried about the miscellaneous bump on my front tyre and chuffed that he approved of my true back wheel.

One of the greatest aspects of this trip is meeting people on the way: from friendly bike mechanic hosts to idiots without a pump. They all add a brushstroke to this expanding picture of Canada by bicycle.