The weather was bad. Dreek, dreer, drizzly, dire…whatever your dialect it was a day for indoors.

But no. We were out in the wild. The wind was the worst. Though it was strong enough to push a heavy, tired cyclist up the side of a mountain, it was wild and irregular. The open landscape gave little or no protection. As the road twisted and turned around the contours, the crosswinds snapped across the road with cold teeth. The rain had already soaked us through. The left side of my body, because it was on the westerly side, was getting more battered than my right. My left foot was dead numb and cold with pain. The rain hit hard against my left ear. As I summited another grey, waterlogged hill, I reached for my gears with my left hand but couldn’t move my frozen left thumb enough to shift gear. Why am I here? Is this not pig-headed, stupid and dangerous? Get off your bike, get in the car.

After an hour of cycling we pulled into the car park outside a hotel. We were hoping for warming tea and coffee only to discover that the hotel bar was closed to non residents. “That should be illegal! All hotels in Scotland should be obliged serve hot drinks!” My mum hissed angrily. We were too cold to complain. We took shelter as best we could in the car. The rain hit against the windscreen, the wind shook the car. We ate flapjack.

The support vehicle was setting out and we weary cyclists were commanded to follow up hill and down to sea level. Again it rained and blew. A stag looked out, totally bored. A castle ruin from clan warfare crumbled further… Who fought to live as lords of this desolate place?

I stopped at the sign called “Rock Stop”: it seemed like a command but it was in fact a cafe and visitor centre for the Northwest Highlands Geopark, where 19th century scientists had first figured out the basic foundations of geology. Not quite warm enough to fully thaw but protection from the wind, a cup of coffee, a slice of rocky road and a view of the grey loch through a window running with rain drops. We led our quaking support vehicle over a high level bridge (my mum hates high bridges even more than I do). We cycled up a hill. We grumbled at our support driver. We grouched at each other. We cycled down. We took photos of soggy shepherd with his wet woolly flock and his drenched dog.

For a moment the clouds broke. Heading towards Durness we reached a summit. Below was a huge, wide valley that sloped down for ten miles to the sea. Harsh mountains lay behind us. Ahead lay softer green fields, light and dark, painted by the shadow of the fast moving clouds. The sun broke through. We freewheeled down towards the rainbow. A moment of joy.

It didn’t last. We arrived at the campsite with enough time to dive into the car before the rain arrived again. Drum, drum, drum went the rain. We found the whisky and had a wee dram while it continued. Drum, drum, drum. We had another dram. What can I say? The weather was bad. 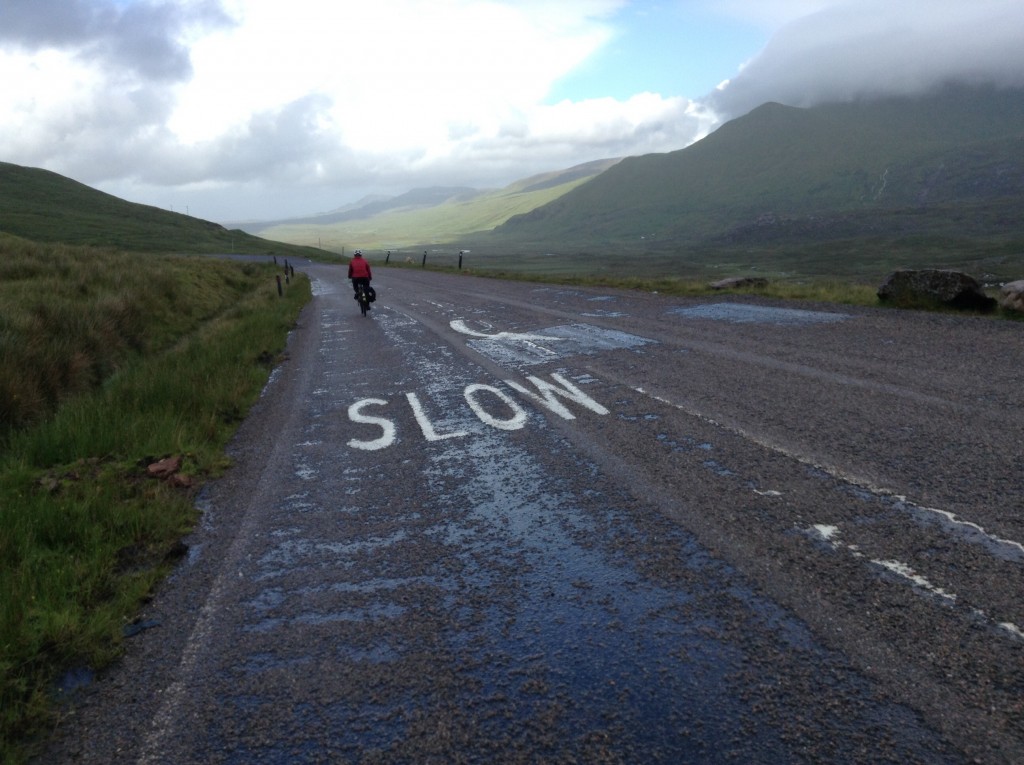