“Oh, it doesn’t have Tarmac again until you’re just outside Novar,” the man replied, one arm resting on the Algoma chair, the other hand cupped around a pleasant drink.

Just outside Novar was, according to Google maps (which had helped me get into this pickle in the first place), about 13 kilometres away. That meant 13km of cycling on a sandy, bumped, pot holed dirt track. My heart sank.

“Is there a beer store in Novar?” I asked, since the man seemed to be the sort of man who would know the answer to that. Indeed there was. Light at the end of the tunnel came in the form of beer at the end of the dirt track. I set off down the track and promptly skidded as the front wheel entered sand. The track pitched to a new vertical descent. Monty wobbled nervously. His brakes protested. For the first time in Canada there was nothing to do but get off and walk. 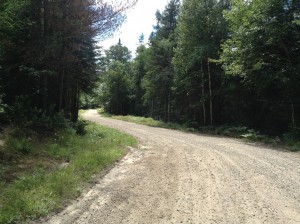 And this was one of the smoother sections…

The day had started by saying goodbye to the Wanderers to the last and final time. They were headed directly east towards their music festival in Montreal, whereas i was going north to join a 3 day canoe trip in Algonquin park. It has been fun cycling with them. I have realised while cycling by myself how much having someone else there can distract you from the pain and lighten the burden of worry when things go wrong. In fact, what is miserable alone is bearable with two. And highly comedic with three. With the Wanderers cycling was often very funny – both intentionally and unintentionally (see somersaults and poison oak for more details). I shall miss them.

Monty’s brakes weren’t feeling great so I set off to Bracebridge to get Monty some TLC. Ecclestone cycles proved to be a very friendly bike shop; the guys in there adjusted Monty’s brakes, pumped up the tyres and cleaned the chain for free. The owner also gave me some advice the route ahead. This is going to be a good day, I thought.

Taking backroads to avoid a highway inevitably means hills. In Ontario, where even the main highway can’t avoid the bumps, backroads duck, dive and tumble like a rollercoaster route. The landscape here is very chopped up. It made me think “this is gonna be a tough day” so I stuck some music in to distract myself. Yet after a few climbs I realised that although the climbs were hard work I felt good: yesterday’s rest day and the last 4000+ kilometres of training had paid off. I passed through cottage country. The road winding through the forest was dotted with wooden holiday cottages. Muskoka, the area I’m in, is a popular spot with city folks from Toronto who buy cottages here in order to enjoy hot summers fishing, canoeing and lazing in the sunshine.

A few kilometres past Huntsville, I stopped for lunch at a quiet spot by lake. All was well. I felt happy and very on schedule. But then it seemed to get hillier. Memories of north Devon came back to me. And then what I feared appeared before me: the road descended into gravel. And, worst yet, sand. Monty wobbled as his tyres sliced diagonally through the thick sand.

At the side of the road was a house. It was a typical wooden cottage but it was so beautifully decorated with flowers, and ever window frame and corner was so neatly painted in bright colours that I could not help but stop. Sitting outside was a man, enjoying a beer on his garden chair. He warned me that the road wasnt going to get better, but also informed me there was beer at the other end of the road. There were no other options but to push on.

I pushed Monty up the next sandy bank. How long was this going to take? What about Monday? I was headed to the small town of Kearney for my canoe trip but on Monday I would have to return south again before I began heading east to Ottawa. Do I have to walk this again? Should I risk the highway? My sandy detour was not only much tougher terrain but also 20km longer than the highway.

Eventually the sand gave way to rough concrete road and then Tarmac. I could have kissed the ground! Poor Monty had had a rough ride. Thankfully the very small town of Novar had a pay phone so I was able to call my mum to wish her a happy 60th birthday. She had celebrated her birthday by going to the watch the Tour de France arrive in Paris and I was keen to hear about the trip and wish her a happy 60th before I headed into the wilds. Unfortunately I spent a good chunk of our conversation fretting about the road and how I would return south to Huntsville!

2km from the campsite I changed my mind. i could have just cycled another 2km and then lay down with my beer and built a campfire but, no, then tomorrow morning I would still have 17km to cycle to the canoe trip meeting point. Even though it was nearing 5pm, I decided to head for a farther campsite some 21km away. This campsite would be nearer the meeting point for the canoe trip. I was worried that after Monty’s rough day I might discover some problem with him tomorrow morning. So off I went…

What on earth makes that ordeal worthwhile? I arrived at the campsite having done 106km on what was supposed to be an easy day. But upon arrival, I was charged $10 less the listed price and told I could camp anywhere. Indeed, the kind lady recommended I camp by the lake. What makes 106km of tough, hill climbing and a detour via sand dunes and gravel track worth while? I could think of only 2 things – but I had them both. 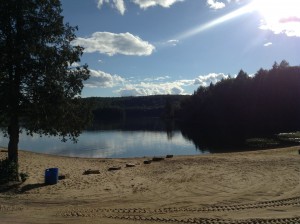 Worthwhile reason #1: the view from my tent. I had this beach and lake almost entirely to myself 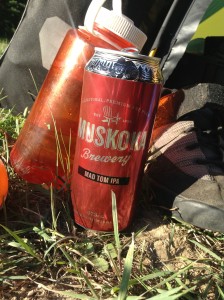 Worthwhile reason #2: local Muskoka beer. I had this can entirely to myself.