That’s what the Tour de France riders cried when the route organisers first plotted the tour’s route through the Pyrenees. The words are emblazoned on the front of the Rapha top that I have been wearing on most of the trip. And which I was wearing, quite fittingly, today as I climbed the steepest, most evil, hernia-inducing ascent so far. 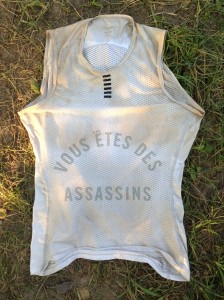 This top was brand new and pure white when I left…

I knew it was going to be a long day as my short(ish) day yesterday meant I had 140km to the Soo (aka Sault Ste Marie). The forecasted weather was hot with highs of 31 degrees. The predicted terrain was hilly with highs of… High.

So I set off at 8am from the campsite, enjoying the low glowing sun as it cast the westerly shadow of Monty and I pedalling. The wind was already beginning to pick up. A headwind, of course. As my average speed dropped lower and lower with each climb (down to 15km per hour at one point) I started getting concerned that I would not make it to the Soo before night fall.

Something needed to be done. I reached into my pouch and pulled out my “double latte” energy gel. Now normally I would not promote any specific item in my blog yet this Clif energy gel transformed me into a pro rider, like Popeye eating spinach. Within seconds my legs were pumping at twice the speed. I pedalled faster and faster. The hills slowly flattened out. Up ahead I saw the Wanderers (they had stayed at a different campsite 20km further ahead than me). I was gaining on them every second.

“Hellllloooooo!” I called, as I screamed past, “I’ve just eaten a caffeine gel and I can’t stop!!”

The scenery today was absolutely stunning. The road followed the shoreline of Superior. This is a place for adventure. Cars drive past carrying canoes and sea kayaks, hunting for adventure, chased by laden motorbike tourers. In the bay the black outline of a group of swimmers splashed around. The water is so clear that I could see the pebbles at the bottom of the lake from the roadside.

I really enjoyed today’s ride although I wish I could have stopped more, but with so many miles to do and keen to arrive at the bike shop before it closed, I kept pedalling. My only big stop of the day was at a picnic bench next to a signpost declaring that I had reached the halfway point of the Trans-Canada (oh so maybe I wasn’t halfway two days ago..) In the afternoon the heat intensified. All was still going well but then I met…

I have seen skateboard ramps that are more gently sloped. I have heard of ski jumps which are not as steep. Indeed, I have known chunky blocks of cheese that have a lesser gradient. 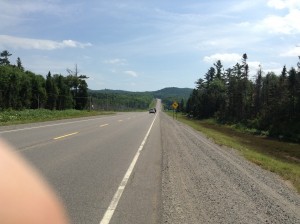 Ahead of me the road pitched up into the sky. For reference, the bit of road in the photo that looks flat is actually still uphill (or so my legs were telling me.)

By the time I met the Cheese Wedge of Doom I had already cycled a cheerful 116km. I slipped into my lowest gear (which is actually very very low since Monty has mountain bike gears). I had to keep pedalling to save falling off, rolling backwards and to stop Monty’s front wheel peeling off the near vertical ascent. Yet each pedal stroke felt like I was sitting on one of those leg press machines at the gym – doing the maximum weight possible. My heart was pounding. I was sweating so much that salt was visibly clinging to my skin. My head was sweating so much underneath my helmet that it felt like my head was crawling with lice. Yikes. I am actually going to collapse. Just before I was about to pass out I pulled over into some shade and poured a bottle of water over my head (thankfully remembering to first take my iPod off). But my water bottles were now all tepid.

The ascent continued for another 2 kilometres. Vous. Etes. Des. Assissins. I huffed, and I puffed and, finally, I conquered the hill.

There were still another 18km or so to the Soo. Just as well as I couldn’t have managed much more. I arrived at the Velorution bike shop, an awesome place that offers free camping for cyclists. Here I met Bryan (who I cycled with back in the Rockies) and Kat (whose blog I have been reading for weeks). Kat already had some beer chilling under a bag of ice. Just what I needed.

If I don’t have to do another hill like that again in Canada it will be too soon.