What would the world be, once bereft
Of wet and of wildness? Let them be left,
O let them be left, wildness and wet;
Long live the weeds and the wilderness yet.

Welcome to Nova Scotia! Well, yes, it is quiet Scottish isn’t it? Because its raining again. And there is a sign post for New Glasgow. 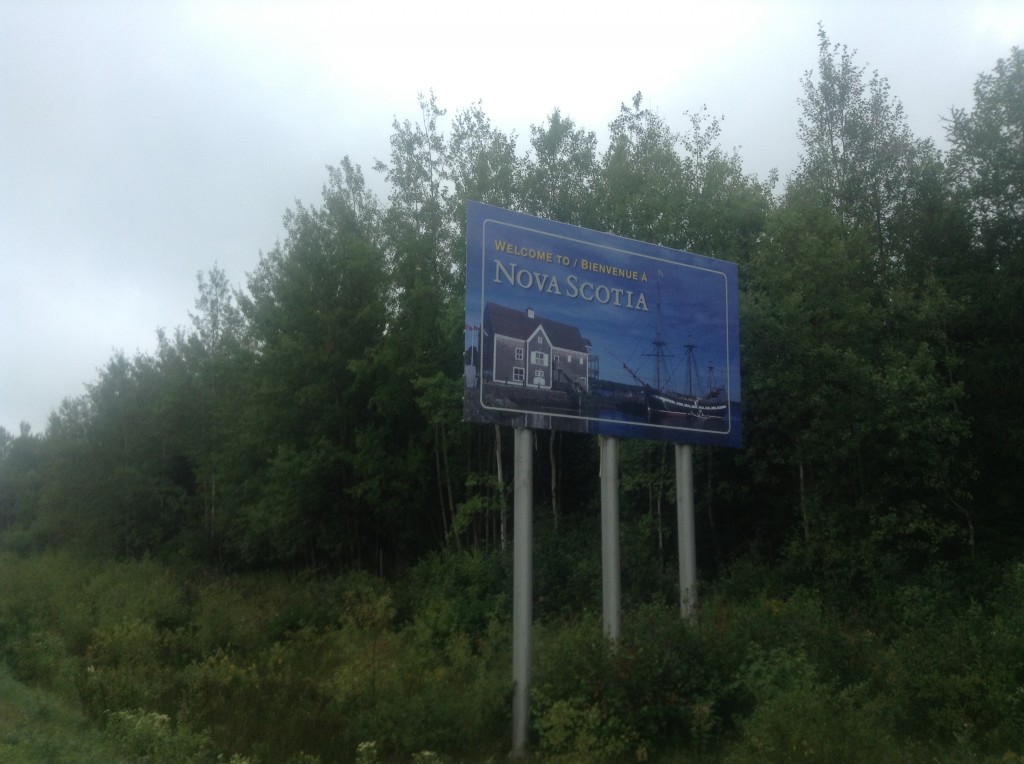 It had started to rain as the ferry from PEI as we approached the misty coast. Just after the ferry port, I stopped for a quick cup of tea hoping the rain would abate. It didn’t, it just rained harder. It poured. A man walking outside with a cardboard tray of coffee saw me and commented cheerfully “at least my bike fits on the back of this!” Nodding at his SUV. Oh, because that’s a helpful and encouraging comment. I did not respond.

Monty and I splashed off down the main highway. Monty’s tyres made a slick hiss as they wove through the pooling rain. We approached an intersection. And there it was: HALIFAX.

The first sign of the end. I could get to Halifax in 2 days, just turn West and pedal. i laughed to myself as i cycled past the turn to Halifax. I want to prolong the fun. I am headed East.

All day I was in a ridiculously cheerful mood. My joy was unrelentingly upbeat despite the pouring rain. I only have 9 days left of cycling but I am determined to enjoy them.

I could barely see anything in the grey fog of rain. Cars zoomed past. The rain seeped through my jacket. My socks squelched.

Eventually the rain abated although it made precious little difference given that my socks were saturated and the road was still covered. Each passing truck sprayed the pooled rainwater sideways into me and Monty. But the lifted clouds had improved the visibility. I could now see the next hill approaching, the neighbouring mounds piled with trees. The verge was decorated with white flowers and tangled grasses. There wasn’t a lot else to see. No towns, no roadside stops. Just hills. Blimey, lots of hills. 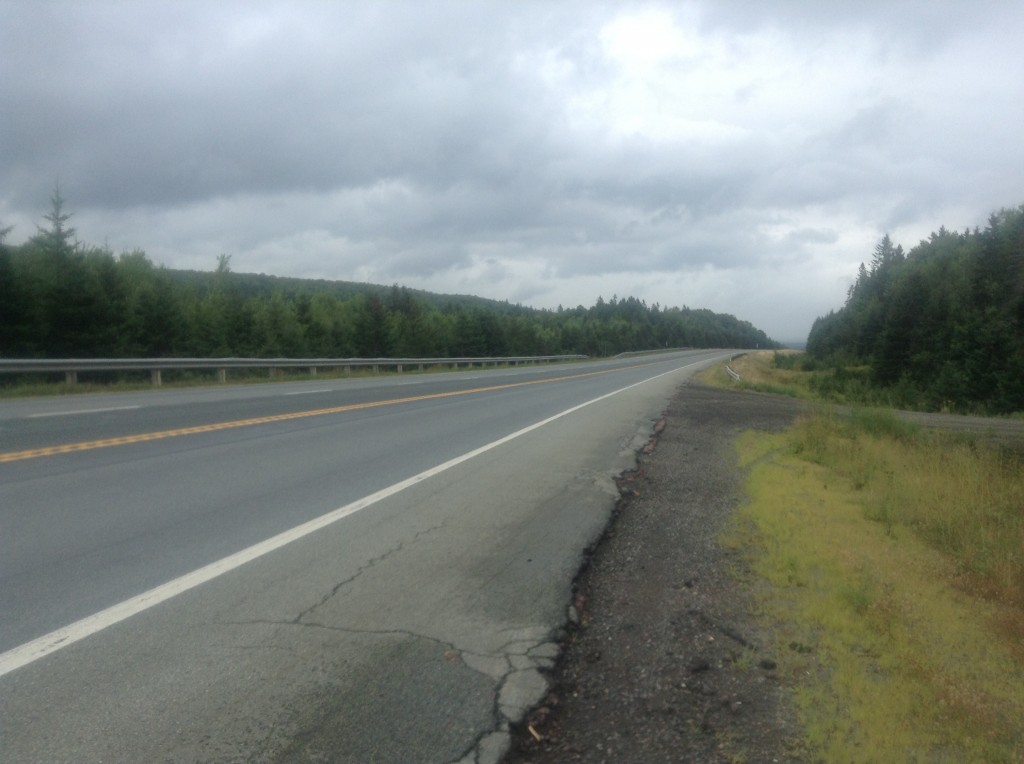 I saw a sign welcoming me to Antigonish county. It was in English. But the second line underneath was written in a second language… Gaelic.

Given how drenched through I was I decided to treat myself to a motel. The motel owner, a former police officer, was very friendly and equalled inquisitive as he interviewed me about my trip. He couldn’t quite believe I biked here from Victoria, BC. (Neither can I, to be honest, it is such a long way). We chatted for a while before I turned to go to my room.

He’d had a woman here before demand to leave when the squadron of police cars had ferried round in the darkening night. Suspecting the police to be cracking down on the drug den located in the motel she was indignant that she wasn’t going to stay at a place of such lowly repute.

“They just come over here for coffee,” the owner smile. “They just want to hang out but if someone commits a crime and they are in McDonalds then all the locals will complain that they didn’t stop the crime because they were drinking coffee in McDonalds. So they come here.”

While my socks hung over the shower rail, I ended the day lying on my huge, comfy bed eating take away pizza. It was worth the $3 extra to have it delivered. I will sleep well. Tomorrow I head to Cape Breton.